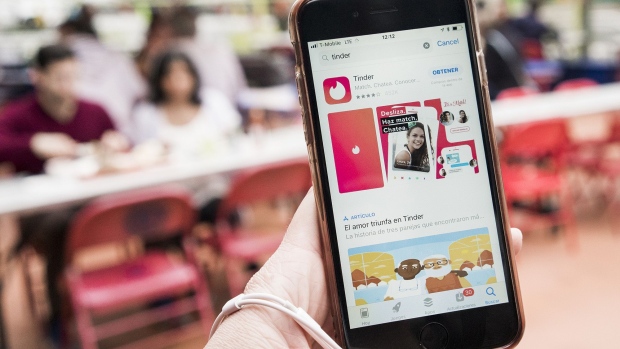 Match Group Inc. gave a positive forecast for revenue growth in the current period, suggesting singletons will continue to flock to online dating apps despite a global pandemic.

The Dallas-based owner of apps such as Tinder said it expects third-quarter revenue of at least US$600 million, beating the average analyst estimate of US$572 million. Match forecast adjusted earnings before interest, taxes, depreciation and amortization of US$215 million to US$225 million. Analysts had expected US$215.8 million, according to data compiled by Bloomberg.

“Since early May, we have seen a recovery in propensity to pay across the portfolio,” Chief Executive Officer Shar Dubey and Chief Financial Officer Gary Swidler wrote in a letter to investors Tuesday. Usage levels for younger users and females remain above pre-COVID levels, the letter said. While usage among males initially dipped with the onset of the pandemic, it has now also recovered to pre-COVID levels. Total daily messages sent across all of Match’s 45 different dating brands -- and daily average swipes at Tinder -- are higher now than they were at the end of February, according to the investor letter.

Match, which owns some of the world’s most popular dating products, said in May it expected the pace of sales growth to slow in the second quarter as shelter-in-place orders disheartened prospective daters. Dating apps usually run on a model that is free at a basic level but user’s pay for additional features, like unveiling who has shown interest in you.

The coronavirus has dramatically changed the playbook for in-person dating, but it hasn’t crushed the craving for human connection. Instead of giving up on romance, daters have started adjusting to shifting norms: random hookups are being replaced with weeks-long virtual courting. Apps have also developed new video features and speed-dating games to keep users engaged.

Sales rose 12 per cent to US$555.5 million in the second quarter, the company said in a statement Tuesday. That was above average analyst estimates of US$532 million, according to data compiled by Bloomberg.

Match’s star performer Tinder, which created the infamous swipe-right function to show interest in a potential date, reported direct revenue grew 15 per cent from the same period a year earlier. This pales in comparison to the 31 per cent revenue growth Tinder reported in the first quarter. Average total subscribers at Match grew 11 per cent to 10 million, with the boost primarily driven by Hinge and Tinder. The company reported earnings per share of 51 cents, beating the average analyst estimate.

This quarter marked the first time Match has reported its financials as a standalone company, after finalizing its spinoff from IAC/InterActiveCorp. During the process, Match added new board members, including celebrity actor Ryan Reynolds.