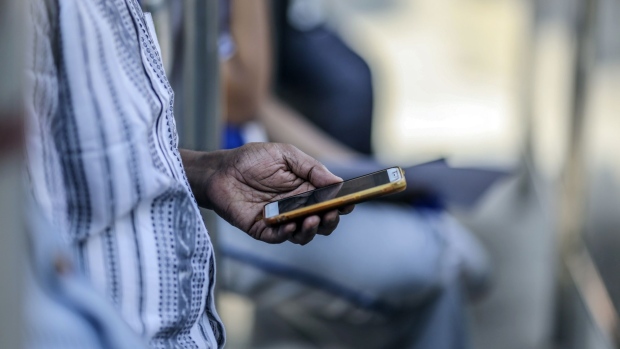 A man uses a smartphone in Mumbai, India, on Saturday, Feb. 15, 2020. Facebook, YouTube, Twitter and TikTok will have to reveal users' identities if Indian government agencies ask them to, according to the country’s controversial new rules for social media companies and messaging apps expected to be published later this month. Photographer: Dhiraj Singh/Bloomberg , Bloomberg

The combined entity, which will operate as the MatchMove group, will target revenues of $400 million and four million customers in 15 countries, including India, by 2026, the startups said in a joint statement.

The acquisition is the first in a series planned by MatchMove to create a rounded set of offerings that will help businesses to go fully digital. The startup was last valued at $600 million during a funding round in June 2021, Naik said. “The group is very near profitability,” he said.

E-commerce revenues in the Asia Pacific region are forecast to double to $2 trillion by 2025, according to a Euromonitor report, while embedded finance revenues are expected to reach $140 billion by that time, the companies said in the statement.

The two startups are in complementary domains, have Indian-origin founders and the bulk of their talent is located in India. MatchMove has over 100 customers, mainly in the Southeast Asian region, and its platform allows businesses to customize and embed financial services such as banking and credit card services.

Shopmatic, which has over a million customers, the bulk of them in India, allows businesses to add e-commerce tools such as digitizing inventory, social commerce and web stores as well as automating their access to the world’s largest marketplaces.

Shopmatic’s co-founder and chief executive officer Anurag Avula will continue to head the e-commerce business, while Naik will lead the group as it scours for other acquisitions.