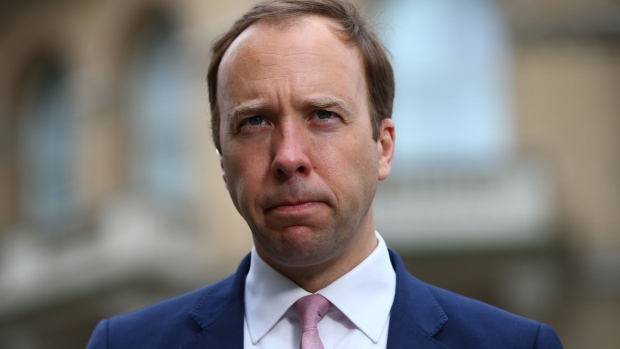 (Bloomberg) -- Former U.K. Health Secretary Matt Hancock’s appointment to a United Nations role has been scrapped, according to a news website that specializes in UN coverage.

“Mr. Hancock’s appointment by the UN Economic Commission for Africa is not being taken forward,” UN spokesperson Stephane Dujarric told PassBlue on Friday, adding “ECA has advised him of the matter.”

In an appointment letter to Hancock, Vera Songwe, executive secretary of the EAC, lauded the “success of the U.K.’s response to the Covid-19 pandemic and the acceleration of vaccines.”

That, she wrote, was a “testament” to the qualities Hancock would bring to the unpaid role, which would involve working on financial innovation and climate change in Africa.

Hancock tweeted on Tuesday that he was “honored” by the appointment and attached a letter of acceptance for the position, dated Oct. 7.

The news sparked a backlash, especially as it coincided with a parliamentary report calling the early pandemic response “one of the most important public health failures the United Kingdom has ever experienced.”

Hancock quit Prime Minister Boris Johnson’s cabinet in June after he was caught by security cameras in his own office in an embrace with one of his advisers, in breach of social distancing rules. He remains an MP.

Hancock didn’t immediately respond to an emailed request for comment from Bloomberg and hasn’t addressed the reversal on social media.