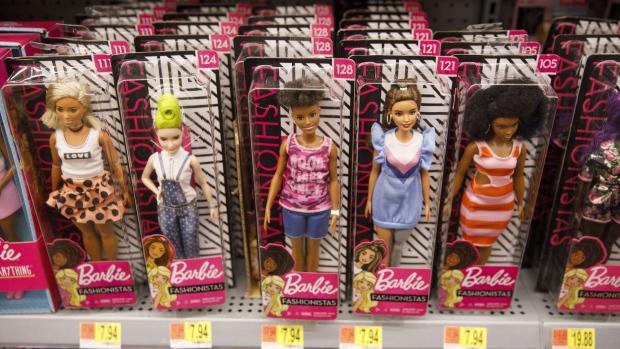 (Bloomberg) -- Mattel Inc., known for its Barbie and Fisher-Price toys, rose in late trading after raising its full-year guidance, saying the company is working through supply bottlenecks that are hobbling numerous industries.

“We are meeting demand,” Chief Executive Officer Ynon Kreiz said in an interview. “I can’t say we’re meeting all of it, but we still expect to meet more than we thought we would, which is why we are raising our guidance.”

Toy sales tumbled early in the Covid-19 pandemic but have since rebounded. Now, with pervasive supply-chain challenges, including logjams at major ports, there’s a question of whether toy companies can deliver on all of their orders by the holiday season.

Mattel says it’s navigating that disruption and expects to have a strong holiday season. The company expedited procurement of raw materials, contracted for ocean-freight capacity and rates in advance, and secured access to additional ports and shipping lanes -- “all to mitigate the type of disruption that we all hear about,” Kreiz said.

The company, the second-largest U.S. toy company behind Hasbro Inc., now expects full-year sales to increase by about 15%, up from an earlier forecast of 12% to 14%. It registered $4.58 billion in 2020 revenue. The company also bumped up its 2021 projection for adjusted earnings before interest, taxes, depreciation and amortization, saying it could generate as much as $925 million on that basis. The previous peak estimate was $900 million.

Shares of El Segundo, California-based Mattel gained as much as 6.9% to $21.74 in extended trading Thursday after it reported third-quarter sales and profit that exceeded Wall Street estimates. The stock had risen 17% this year through the close in New York.

Mattel’s third-quarter sales grew 7.7% to $1.76 billion, the company said in a statement Thursday, beating the $1.68 billion average of analysts’ estimates compiled by Bloomberg. It reported profit of 84 cents a share, excluding some items, exceeding the 72 cents analysts were expecting.