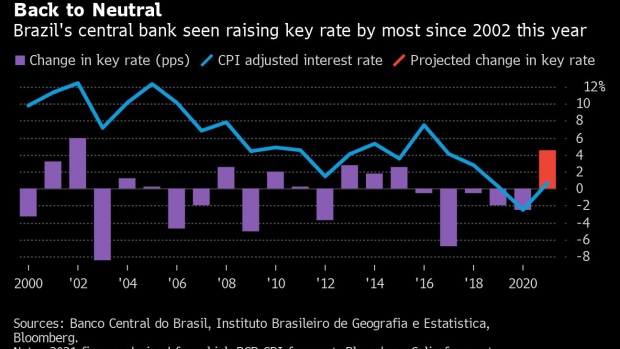 Andy Haldane, chief economist of the Bank of England, pauses during an interview in London, U.K., on Tuesday, May 14, 2019. Haldane has a reputation for views that go against groupthink, despite spending more than a quarter century at Threadneedle Street. , Bloomberg

The Bank of England’s chief economist is poised to sound an alarm bell on inflation before he leaves the building.

Andy Haldane is likely to emphasize the risk of price growth getting out of control when he attends his final Monetary Policy Committee decision on Thursday. He’s been the sole advocate on the panel for dialing down stimulus and outspoken on the growing threat of inflation, warning this month that the U.K. is at a “dangerous moment.”

The BOE’s disagreement on the risks is part of a wider soul-searching in global monetary policy on whether a rebound from the pandemic could sow the seeds of a worrying spiral in consumer prices. Just last week, the Federal Reserve revealed its own surprising disquiet as it signaled the eventual possibility of faster interest-rate increases.

Haldane’s offbeat research focus on matters ranging from inequality to automation earned him a reputation as a maverick in the staid world of central banking, and much wider public attention than his predecessors in the role. With no successor currently named, his exit may leave an intellectual void overlapping into policy.

The question for the BOE now is whether any colleague on the MPC is willing to take up Haldane’s mantle as a prophet of inflation, perhaps joining his dissent about the current settings of stimulus.

While economists surveyed by Bloomberg News don’t anticipate that happening, Gertjan Vlieghe -- who himself is slated to leave later this year -- is the official leaning closest to switching sides.

“The Monetary Policy Committee is likely to vote unanimously to keep interest rates on hold at 0.1%. We expect an 8-1 vote in favor of keeping the asset purchase target at 895 billion pounds.”

Elsewhere, central bankers in Mexico, Thailand, Hungary and the Czech Republic are also set to meet and flash PMIs provide a snapshot of the state of the economy across the world.

While the BOE is set to keep its stimulus in place on Thursday, other central banks are rapidly shifting gear.

In Hungary on Tuesday, officials are poised to start one of the region’s first monetary-tightening cycles to combat the fastest inflation in the European Union. Predictions by economists vary considerably on just how large a rate increase is likely.

The next day, the Czech central bank is predicted by almost all economists to follow suit with a quarter-point hike to 0.5%.

The European Central Bank is still far from a tightening mode, with emergency bond purchases slated to continue until March and an accelerated pace of buying pledged for coming months. How committed the institution is to that timetable may be a question for President Christine Lagarde when she addresses the European Parliament on Monday.

Other ECB officials due to speak this week include Executive Board members Luis de Guindos, Isabel Schnabel and Fabio Panetta.

Meanwhile in South Africa, data on Wednesday may show inflation jumped to the highest level in more than two years in May. That would be in line with the projection model of the central bank, which indicated last month that its interest rate will increase before the end of the year.

In Zambia, where the central bank has warned it will raise borrowing costs again if inflation doesn’t slow, data on Thursday will probably show price growth stayed above 20% in June.

Data on May foreign tourist arrivals will provide insight into whether Turkey retains any hopes of recovering its summer tourist season, a key source of foreign income, while travel remains restricted by many nations due to the pandemic.

Investors in the U.S. will be watching closely for the latest reading on personal income and spending, due out on Friday. The data will influence perspectives on the pace of inflation in the economy, a debate that grew even more intense after the Fed statement on Wednesday.

Fed Chair Jerome Powell and his colleagues at the central bank surprised many with their more hawkish pivot on the outlook for inflation. Powell is scheduled to appear on Tuesday before Congress in Washington to provide an update on the Fed’s lending programs and support for the economy.

Other reports due out in the U.S. Include figures on existing and new home sales, manufacturing, durable goods and the latest weekly jobless claims.

Bank of Korea Governor Lee Ju-yeol gives a speech on inflation on Thursday that will be closely scrutinized amid growing speculation the bank will raise rates as early as the last quarter of this year. Preliminary trade data for June earlier in the week is likely to support the case that Korea’s economy is roaring back.

China sets its loan prime rate on Monday, Thailand has an interest-rate meeting on Wednesday and the Philippines on Thursday.

Mexico posts a raft of economic indicators this week and the central bank meets Thursday, where a decision to keep the key rate at 4% is all but certain. Demand and growth have revived as reports on retail sales, economic activity and unemployment should attest, but stubbornly elevated consumer prices are pressuring inflation expectations.

Argentina will also be active, reporting budget, trade, current account, joblessness and first-quarter output. Local economists surveyed by the central bank are marking down their 2021-2023 forecasts for inflation and growth.

Brazil’s central bank on Tuesday posts the minutes of last week’s meeting. A third straight 75 basis-point increase took the Selic to 4.25% with the bank signaling a similar hike for the Aug. 4 meeting as full normalization is now its base case. Updated forecasts in the bank’s quarterly inflation report out Thursday should provide a good idea how high a “neutral” Selic might be. Friday’s release of mid-month inflation data may show the annual rate rising further above 8%.