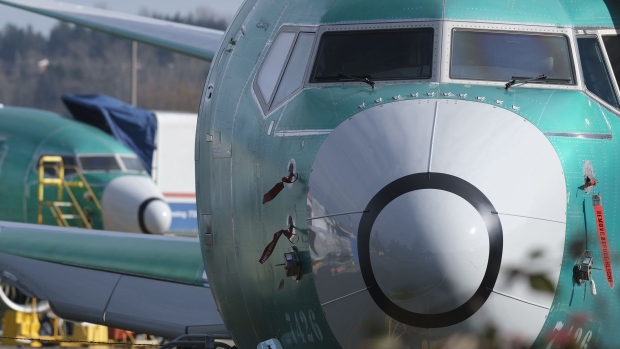 (Bloomberg) -- After his daughter Samya died in the crash of a Boeing Co. 737 Max in Ethiopia, Massachusetts lawyer Michael Stumo was stunned to learn that key decisions on the plane’s design were approved by the company.

Under a decades-old system that was expanded several times since 2005 by Congress, aviation regulators delegate some certification work to aircraft manufacturers, and that was the case on significant elements of the 737 Max system implicated in two fatal crashes.

“It’s absolutely surprising and now horrifying that these things can get through,” Stumo, an activist on U.S. trade policy, said in an interview. Stumo and his wife, lawyer Nadia Milleron, who is consumer advocate Ralph Nader’s niece, have become leading voices for crash victims’ families.

Now, as fixes to the plane are nearing completion, the fatal crashes have fueled momentum to revise the Federal Aviation Administration’s process for certifying aircraft. Following the public outcry from family members of victims, U.S. lawmakers and the nation’s top aviation regulator have embraced change after a series of reports has highlighted how risks in the plane were underestimated.

A House of Representatives committee has called FAA chief Steve Dickson to testify Dec. 11 in a hearing that will examine the agency’s role in certifying the Max. Dickson took over the FAA five months after the March 10 crash in Ethiopia.

Despite the pressure, it may be difficult to alter the current system -- in which Boeing engineers deputized by FAA sign off on more than 90% of designs -- as it would reverse a decades-long trend embraced by Congress to streamline regulation of aviation by shifting the costs and expert oversight to manufacturers.

It could also have profound effects on the aviation industry that would ripple out from behemoths such as Boeing to the thousands of smaller companies making aviation equipment in the U.S., according to current and former officials familiar with the process.

“It could have impacts amounting to hundreds of millions of dollars across the board,” said Mike Borfitz, an aviation industry consultant who has previously worked on aircraft certification both at the FAA and at Boeing.

An edict requiring more hands-on approvals by FAA, for example, could slow down development of aircraft and raise costs, while also straining the resources of the agency, according to Borfitz and others.

A range of other possible changes to the certification process under discussion could also have profound impact. The U.S. National Transportation Safety Board, for example, in September recommended changing the assumptions for how pilots react to emergencies, an issue highlighted by the findings of investigations into the crashes.

Lawmakers including the powerful chairman of the House Transportation and Infrastructure Committee have focused on the issue since the crashes off the coast of Indonesia and in Ethiopia that killed 346 people.

Even though FAA retains the ultimate responsibility for ensuring safe designs, it deputized Boeing engineers to sign off on the vast majority of work using an in-house group called Organization Designation Authorization.

The justification for the system is that FAA can’t possibly have as much expertise as a company such as Boeing. By delegating more routine decisions to company engineers, the FAA can focus its limited resources on the handful of the most complex and dangerous issues. The agency still oversees the process and retains the right to review matters it considers dangerous.

But critics, including federal unions, argue that it gives away too much control.

The flight-control feature that helped lead to the 737 Max crashes, the Maneuvering Characteristics Augmentation System, was reviewed by FAA in its early development. But Boeing’s ODA approved it with little FAA input after design changes made it more powerful.

Representative Peter DeFazio, the Oregon Democrat who is leading the House investigation into the crashes, said in a statement that lawmakers are still gathering information and it’s too early to say how the process should be changed.

“But it is already abundantly clear that we will need to reform certification rules to enhance federal oversight and ensure proper firewalls between manufacturers and regulators so that a plane with a risk of catastrophic failure never slips past regulators again,” DeFazio said.

Republican leaders of the committees overseeing the FAA, Senator Roger Wicker of Mississippi and Representative Sam Graves of Missouri, were more cautious, saying in email responses to questions that they want to see more evidence from investigations before committing to specific action.

Delegating authority to aviation-company employees to approve designs is hardly new. It has been used since before the FAA was born in 1958. Since then, the agency generally had a direct role in overseeing the engineers. In 2005, changes in the law allowed companies such as Boeing to create a system in which the employees reported to company management.

Current FAA staffing levels would make more hands-on approvals by the agency challenging. At Boeing alone, there are about 1,500 people in the ODA, while the FAA team overseeing their work has 45, only 24 of whom are engineers, a panel of international regulators found in October.

It would take 10,000 more employees and an additional $2 billion for the FAA to take over all certification decisions, Daniel Elwell, the agency’s deputy administrator, told senators at a hearing in March.

The current effort by FAA to oversee and approve fixes to the 737 Max illustrates the challenges posed if the agency were to regain more control.

Altering software on just two systems on the plane has strained the limited resources of federal regulators, who are approving every decision, according to a person familiar with the work. The process, now more than a year old, has taken months longer than anticipated.

The effort is necessary to reassure the public that the grounded plane is safe, but it isn’t sustainable, said the person, who asked not to be named because he wasn’t authorized to discuss the work.

There are a range of alternatives that would provide more direct oversight by the FAA while still allowing companies to perform much of the approval process, Borfitz said.

One approach would be for FAA to assign more people to oversee Boeing’s ODA program to ensure it’s making more independent decisions, he said. Another option would be to require Boeing’s ODA to be run by a separate company.

Family members of crash victims, including Stumo and Paul Njoroge, who lost his wife, three children and mother-in-law in the Ethiopian crash, have argued that FAA should return to earlier times when it oversaw the designated engineers more directly.

Having to oversee the 1,500 Boeing employees doing that work would require significant new resources for FAA, Borfitz said.

For its part, Boeing has already acted to better insulate employees performing certification approvals from company pressure by having them report to a new, internal safety organization.

David Silver, the Aerospace Industries Association vice president for civil aviation policy, said it’s too early in the process to comment specifically on changes to certification. “We welcome this review and we’re committed to helping the FAA further improve the system,” Silver said. The trade group represents Boeing and other U.S. companies.

Dickson, the new FAA administrator, hasn’t signaled that the agency is considering increasing the number of certification engineers and hasn’t released details of any plans.

In a speech Nov. 12 in Washington and in other forums, he has said he wants to make the process more “holistic,” do a better job of assessing the potential for human error by pilots, and improve communication within the agency.

Lawmakers have promised more hearings on the subject, and there are several more reviews remaining of FAA and the 737 Max failures -- plus a federal criminal investigation into the plane’s approval.

“This instance raises a question of whether there was adequate, arms-length and knowledgeable oversight of the manufacturing of this airplane by the FAA,” DeFazio told reporters last month. “And I think the answer to that is no. We’re going to have to figure out how to fix that in the future. This shouldn’t have happened, and it should never, ever happen again.”

To contact the editors responsible for this story: Jon Morgan at jmorgan97@bloomberg.net, Elizabeth Wasserman, Flynn McRoberts