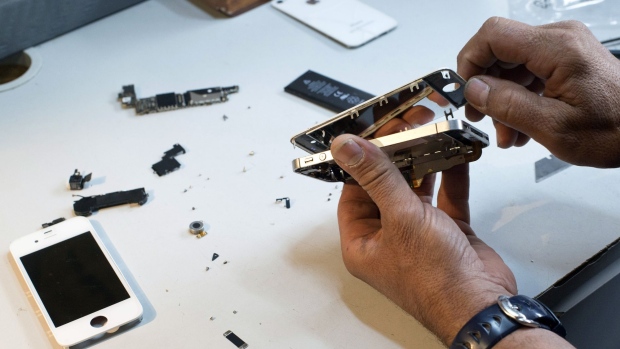 Michael Ghadieh, owner of Fix My Phone SF, fixes an Apple Inc. iPhone in his shop in San Francisco, California, U.S., on Friday, Aug. 23, 2013. On the eve of a planned Sept. 10 introduction of new iPhones, refurbishers pose a challenge to Apple, which is already grappling with a shift in consumer demand toward cheaper handsets, as well as Samsung Electronics Co.-led competition thats flooding the smartphone market. , Photographer: Bloomberg/Bloomberg

(Bloomberg Opinion) -- Upgrading to an iPhone 12? Apple Inc. is happy to take your old phone off your hands. “If it’s in good shape, we’ll help it go to a new owner,” the company promises on the website promoting its trade-in program. “If not, we’ll send it to our recycling partner, so we can save more precious materials and take less from the earth.”For years, Apple has used such rhetoric to convince consumers that it’s a greener and more sustainable company than its competitors. Increasingly, it’s fair to ask how sincere it is.Earlier this year, Apple filed a lawsuit against GEEP Canada, a recycler it had hired to destroy and recycle old devices. Rather than do the contracted job, Apple says, GEEP employees determined that many of these devices were still perfectly usable, and diverted at least 100,000 for resale. After an investigation, Apple found that many of the lost phones were being used in China — presumably still in “good shape.” Apple’s anger at GEEP is certainly understandable if those charges are true. But consumers who entrusted Apple to manage their used goods in an environmentally friendly way could be forgiven for holding their own grudge. When the details of the case recently came to light, plenty of people in the tech world objected. In this case and others, it’s clear that Apple has repeatedly failed to live up to its own lofty promises on managing old devices. In doing so, it’s diverted consumers from seeking out more sustainable and lucrative outlets for their unwanted gadgets, and undermined its case for being a good environmental steward.Making a new smartphone isn’t always a pretty process. According to Apple, 79% of the carbon emissions associated with the total lifespan of an iPhone 11 are emitted during the production phase. To its credit, Apple has tried to mitigate these harms. Among other things, it now uses recycled tin and rare-earth elements, which is a big improvement over using virgin materials. And the company’s trade-in program provides a steady stream of used phones that can be refurbished and resold. In its most recent environmental report, Apple says that it refurbished 11.1 million devices for new users in 2019, and notes that each one “represents a smarter and more environmentally efficient use of the resources and materials we rely on to build our products.”Yet that laudable commitment has long been in tension with the company’s drive to sell new devices. Sometimes Apple is upfront about this. In 2019, Chief Executive Officer Tim Cook blamed weaker-than-expected new iPhone sales on discounted battery replacements. But more often, the company quietly takes actions that limit the number of old devices that can compete with new models. It refuses to provide even basic repair documentation to users, for instance, or to sell replacement parts to customers and unlicensed repair shops. It has also lobbied aggressively against laws that might require such concessions.I’ve covered the recycling industry for more than a decade, and in that time I’ve encountered numerous executives who’ve expressed dismay at Apple’s requirement that at least some perfectly reusable devices be recycled. None of them advocated breaking contracts and diverting those devices to secondhand markets. But I’m not surprised that employees at GEEP would think to do so. Seeing treasure where others see junk is a well-worn path to recycling profits.So how does Apple decide which devices should be reused and which recycled? When I asked, a company spokesperson would only say that it subjects them to “rigorous testing.” She also warned that devices that are refurbished with non-Apple parts represent a safety concern. But there’s little public evidence to support that claim. In 2018, 176 million used smartphones were shipped globally, yet malfunctioning parts simply don’t factor into the leading causes of smartphone-related injuries.The good news for iPhone 12 upgraders is that they don’t have to rely on Apple to ensure that their devices have long afterlives. In the U.S., hundreds of businesses will buy old iPhones for refurbishment and resale, and they often pay handsomely. Few of these companies make the kinds of sweeping sustainability claims that Apple does. But, unlike Apple, they don’t have to worry that their used products are competing against their new ones.

Adam Minter is a Bloomberg Opinion columnist. He is the author of “Junkyard Planet: Travels in the Billion-Dollar Trash Trade” and "Secondhand: Travels in the New Global Garage Sale."