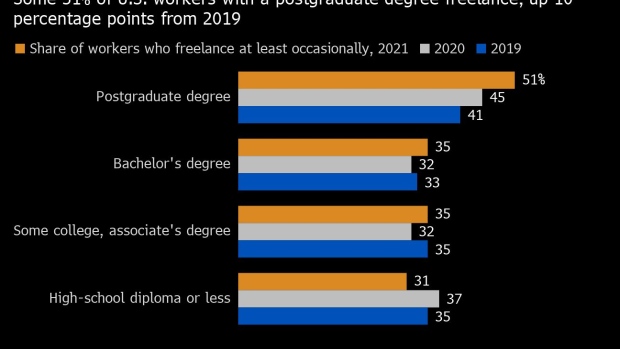 A woman sits and works on a laptop computer. , Photographer: Simon Dawson/Bloomberg

(Bloomberg) -- Highly educated, skilled professionals are increasingly striking out on their own, shaking the perception that freelancers are largely lower-paid gig workers.

Some 53% of the approximately 59 million workers in the U.S. who provide at least some of their services on the side specialize in advanced fields such as computer programming, information technology and business consulting, according to a report by online freelance company Upwork Inc. That’s up from 50% of the total in 2020 and 45% in 2019.

The report also showed more postgraduate degree-holders are pursuing freelance work while there are fewer doing so with a high-school diploma or less. That’s helping freelancers contribute a record $1.3 trillion in annual earnings to the U.S. economy, said Adam Ozimek, chief economist at Upwork.

The study defines freelancers as individuals who have engaged in supplemental, temporary, contract- or project-based work within the past 12 months. It draws from a survey of 6,000 U.S. workers over the age of 18 conducted from Aug. 27 to Sept. 29.

The findings suggest more Americans are rejecting rigid routines and long commutes in favor of working from home and setting their own schedules. Some 31% of freelancers report working fully remotely compared to 21% of traditional employees, while 78% of skilled freelancers mentioned ‘schedule flexibility’ as a primary incentive for going at it on their own.

Control over earnings potential is another perk, the report noted. Forty-four percent of freelancers said they make more than they would with a traditional job, up from 39% last year and 32% in 2019.

The survey results echo government data showing a jump in new business registrations this year and a rise in self-employment. Meanwhile, hiring at traditional workplaces is less robust -- U.S. job growth registered its smallest gain this year in November as employers struggle to attract workers amid a wave of resignations.

The trend may stick beyond the pandemic -- two-thirds of freelancers say they’re optimistic about their career in 2022. That compares to 53% of traditional employees, over half of which say they are likely to pursue freelance themselves in the future.