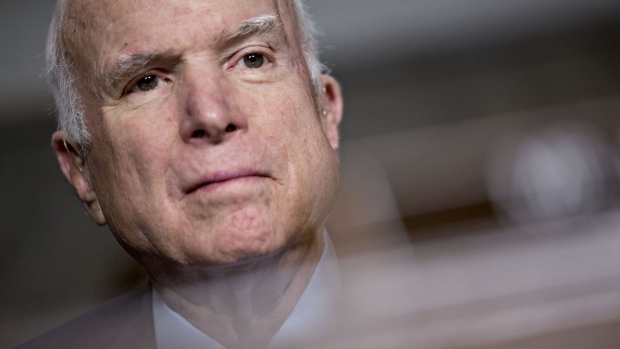 (Bloomberg) -- The Senate Armed Services Committee wants to remove a mandated preference for the use of fixed-price contracts that increase financial risk for Pentagon contractors, overturning a legacy of the late John McCain.

If the provision stays in the $740 billion authorization bill for the year starting Oct. 1, it would eliminate a five-year-old requirement championed by McCain, the Senate panel’s former chairman, to eliminate what he described as billions of dollars in waste in defense spending from contracts that put the burden on taxpayers to shoulder many cost overruns.

The previously undisclosed move by the committee last week would eliminate Section 829 of the fiscal 2017 defense bill, which requires military contracting officers to favor the use of fixed-price provisions when determining what type of contract made the best economic sense. The annual defense bill still must be passed by the Senate and then reconciled with a House version.

The Aerospace Industries Association, which pushed for the change, said in a memo before the committee acted that “Section 829 has added bureaucratic impediments to selecting a cost-type contract when appropriate. This has produced a chilling effect on the use of cost-type contracts even when doing so is in the best interest of the government.”

Rich Efford, the industry group’s assistant vice president of legislative affairs, said in an email, “Congress should give DoD managers the discretion and authority to oversee their programs in ways that accounts for risk” and also provides incentives for innovation. “Repealing Section 829 provides DoD that kind of flexibility.”

A Pentagon spokesperson didn’t provide an immediate comment on whether the department supported the committee move. A spokesman for Senate Armed Services Jack Reed, a Rhode Island Democrat, said he had no immediate comment.

In May 2016, McCain, an Arizona Republican, said in a statement that his provision “places a premium on limiting the use of cost contracts that have required expensive, government-unique processes to manage” and focused “on a transition to more commercial-like fixed price contracts and accounting systems and methods.”

The Government Accountability Office said in February in a report mandated by Congress that fixed-price type contracts for major defense acquisition programs “grew to account for almost half of the $65 billion in obligations,” or money paid out on contracts, for fiscal year 2019.

But the GAO said the Defense Department “has not assessed its use” of fixed-price contracts, “which makes it difficult to determine if this contract type is helping to achieve the desired cost and schedule performance outcomes at an agency-wide level.”