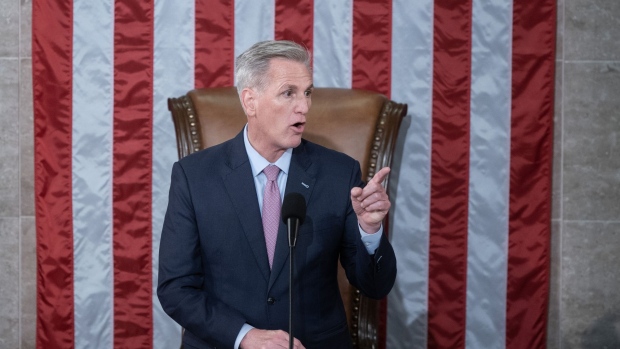 McCarthy accused Schiff of lying when he served as chairman of the panel, telling reporters on Tuesday night, “He does not have a right to sit on the committee.” He added that he made the decision “because integrity matters to me.”

“If he thinks this will stop me, he will soon find out just how wrong he is,” he tweeted. He is expected to join the Judiciary Committee, according to a person familiar with the matter.

Swalwell was similarly defiant. “He can keep me off Intel, but I’m not going away,” he tweeted.

House Democratic Leader Hakeem Jeffries nominated both men to return to the panel, fully aware of McCarthy’s plan but arguing in a letter last weekend to the speaker that they were “eminently qualified.”

“The denial of seats to duly elected members of the House Democratic Caucus runs counter to the serious and sober mission of the Intelligence Committee,” Jeffries wrote.

McCarthy, who met with Jeffries Tuesday night, wrote in a letter to the New York Democrat that he appreciates Jeffries’ standing by his members. But, McCarthy added, he made his decision to reject them “to maintain a standard worth of this committee.”

Appointments to the Permanent Select Committee on Intelligence, unlike most other House committees, are within the prerogative of the speaker. However, the minority party’s recommended choices usually have been seated.

The speaker and other Republicans have contended without offering evidence that Swalwell couldn’t get a security clearance in the private sector because of a report that he was targeted by a suspected Chinese spy, with whom he cut ties in 2015 after being alerted by intelligence officials.

McCarthy revived that issue at his press conference on Tuesday night. “I do not believe he should sit on that committee” either,” he said of Swalwell.

He said previously that Republicans would be targeting a third Democrat, Representative Ilhan Omar of Minnesota, from returning to a seat on the House Committee on Foreign Affairs. Their focus on Omar follows accusations she used antisemitic tropes in earlier comments, for which she later apologized.

The Foreign Affairs Committee is a different type of panel, under House rules, than the Intelligence Committee. Preventing Omar from being seated after her party has chosen her will require a House floor vote.

Democrats are expected to nominate their members to that committee later this week, potentially setting up a floor fight over Omar. At least two Republicans have expressed reservations about making such a move.

McCarthy and other Republicans also have painted efforts to deny panel membership to Schiff, Swallwell and Omar as a response to Democrats under then-Speaker Nancy Pelosi, removing Marjorie Taylor Greene of Georgia and Paul Gosar of Arizona from committees.

The House, under Democratic control, voted in February 2021 to remove Greene from the Education and Budget committees citing her incendiary tweets and statements, including support signaled for the QAnon conspiracy theory. Eleven Republicans joined Democrats in ousting her from the panels.

In his letter to McCarthy on Saturday, Jeffries had said those actions were taken “by both Democrats and Republicans given the seriousness of the conduct involved, particularly in the aftermath of a violent insurrection and attack on the Capitol.”

“It does not serve as precedent or justification for the removal of Representatives Schiff and Swalwell, given that they have never exhibited violent thoughts or behavior,”

Schiff had earlier told reporters by trying to boot him from Intelligence, McCarthy was “trying to satisfy commitments to his QAnon conference and raise money from his right-wing base. It’s sad that he’s treating the Intelligence Committee that way. The work that we do is far too important to be a political plaything for Kevin McCarthy.”