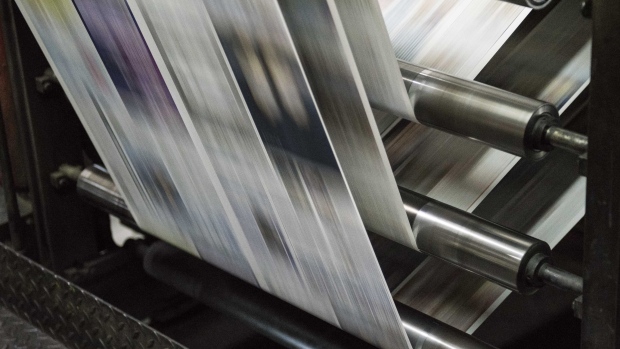 Copies of the Apple Daily newspaper, published by Next Media Ltd., move along a conveyor at the company's printing facility in the Tseung Kwan O district of Hong Kong, China, on Wednesday, June 17, 2015. , Bloomberg

(Bloomberg) -- The McClatchy Co., the storied news publisher weighed down by pension obligations and debt, could file for bankruptcy within the next year, according to analysts.

The company faces the repayment of about $27 million in secured debt in December and a mandatory $124 million contribution to its pension plan in 2020.

“If they can’t offload the pensions or get pension plan relief, they’ll have to file for bankruptcy,” said media analyst Craig Huber, founder of Huber Research Partners LLC, who has followed the company since 1995. In an interview, Huber estimated McClatchy would have free cash flow of less than $20 million next year, a fraction of what it needs to cover its pension obligations.

A representative for the company declined to comment. In its third-quarter earnings release last week, McClatchy said the pension contribution created “a significant liquidity challenge in 2020.” It also warned in regulatory documents that it may not be able to continue as a going concern.

The Sacramento, California-based company operates 29 newspapers including the Miami Herald, The Charlotte Observer and The Kansas City Star. Other large newspaper companies are also in turmoil, with tens of thousands of newsroom jobs cut over the past decade.

Several financial firms, including Alden Global Capital LLC and Fortress Investment Group LLC, have acquired ownership stakes in newspaper publishers that have struggled to adapt in an online world. Chatham, New Jersey-based investment fund Chatham Asset Management LLC is the largest holder of McClatchy debt and, according to data compiled by Bloomberg, is its largest shareholder.

S&P Global Ratings forecast a grim 2020 for McClatchy and last week downgraded it by two notches to CCC-, warning that the company doesn’t have enough money to pay its 2020 obligations.

“It could engage in a distressed debt exchange or file for Chapter 11 bankruptcy before September 2020, when the bulk of its mandatory pension contributions are due,” S&P analysts Thomas Hartman and Vishal Merani wrote in a report.

McClatchy’s pension plan is underfunded by about $535 million. The company asked the federal government to waive its required contribution, but was denied. McClatchy is in talks with Chatham and the Pension Benefit Guaranty Corporation, a federal agency, about the possibility of the PBGC assuming the plan’s assets and obligations, the company said Nov. 13.

The company is also negotiating with Chatham to restructure its debt, including its term loans and junior notes. The company had $709 million of principal debt outstanding as of Sept. 29 and it finished the third quarter with $11.4 million of cash. It refinanced debt with Chatham last year.

If McClatchy were to file for bankruptcy, lenders including Chatham would gain some control over its 30 news organizations and would have a role in deciding whether to continue operations, sell them off piece by piece or follow another strategy, according to Anthony Campagna, the director of research at ISS EVA. “At that point, it’d be their choice,” he said in an interview.

McClatchy reported a 12% drop in revenue to $167 million for the third quarter from a year ago and a net loss of $305 million. The company also said it plans to stop printing a Saturday newspaper in all its markets next year, a sign of how its legacy print business has weighed on its fortunes.

Founded in 1857 as The Daily Bee in Sacramento, McClatchy has two classes of stock, giving the McClatchy family control over the company.

In 2006, McClatchy bought the Knight Ridder chain for $4.5 billion as the newspaper business was entering a long-term decline.

By that year, print advertising dollars had already started to fall, according to Pew Research Center. The newspaper industry has lost advertising dollars over the years to Craigslist, and more recently, Facebook Inc. and Alphabet Inc., which dominate the online ad market. The Knight Ridder deal also left McClatchy hamstrung by debt.

McClatchy’s current market capitalization is a mere $4.5 million, making it the smallest of the publicly-traded newspaper companies. Its 9% bonds due 2026 trade at about 89 cents on the dollar to yield 11.5%. Under pressure to reduce expenses, McClatchy offered buyouts to 450 employees in February and said last year it was cutting 3.5% of its staff.

On its earnings call, McClatchy Chief Executive Officer Craig Forman said the company was taking actions “to deal with an acquisition made in another newspaper era.” He also lamented “the price our communities and we all pay as a society when local media collapses.”

To contact the editors responsible for this story: Rick Green at rgreen18@bloomberg.net, Nicole Bullock