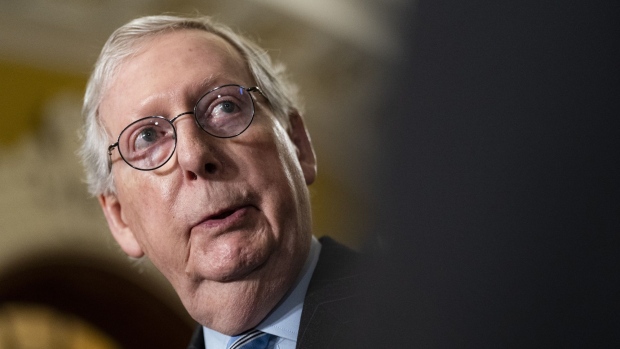 Senate Minority Leader Mitch McConnell, a Republican from Kentucky, speaks during a news conference following the weekly Republican caucus luncheon at the US Capitol in Washington, DC, US, on Tuesday, Nov. 29, 2022. A short-term stopgap funding bill to delay a December 16 shutdown deadline appears increasingly likely as negotiators have made little concrete progress toward a full government funding package. , Bloomberg

(Bloomberg) -- A bid by Democratic leaders to add a plan by Senator Joe Manchin to fast-track energy projects to a must-pass defense bill failed amid a revolt by progressive Democrats and pushback from Republicans.

Manchin’s proposal, which would have sped approval of a stalled $6.6 billion natural gas pipeline by Equitrans Midstream Corp. in his home state of West Virginia, among other energy projects, failed to make it into the National Defense Authorization Act released Tuesday and slated for a US House vote later this week. Shares of Equitrans plunged as much as 8.6% Wednesday.

Democrats need the support of at least 10 Republicans in the 50-50 Senate to pass the defense bill — which has been enacted annually for more than 60 years. The end-of-year effort on the permitting bill was an effort by President Joe Biden and Senate Majority Leader Chuck Schumer to make good on a promise to Manchin in exchange for his crucial vote on a climate and tax package in August.

But several key Senate Republicans resisted the attempt to add it to the defense measure.

Senator James Inhofe of Oklahoma, the top Republican on the Armed Services Committee, said he would vote against his panel’s bill, which is named for him, if the permitting legislation was attached.

“It doesn’t belong there. That’s not what the bill is about,” said Inhofe, who is retiring at the end of this Congress.

Senate Republican leader Mitch McConnell said Democrats were trying to add a grab bag of their priorities “with no relationship whatsoever to defense.”

“My colleagues across the aisle need to cut their unrelated hostage-taking and put a bipartisan NDAA on the floor,” he said.

Some progress Democrats in the House had vowed to block the defense bill from coming to the floor if it includes the permitting language.

“Thanks to the hard-fought persistence and vocal opposition of environmental justice communities all across the country, the Dirty Deal has finally been laid to rest,” House Natural Resources Chair Raul Grijalva said.

Manchin blasted the decision to exclude his measure from the defense bill.

“Our energy infrastructure is under attack and America’s energy security has never been more threatened,” he said in a statement.

The permitting proposal is anathema to environmental groups who say it represents a betrayal by Democrats on climate issues, but Democratic leadership has advocated for its inclusion in the defense bill, according to people familiar with the matter. The White House also said on Monday that Biden supports its addition to the defense bill.

A bid to attach the energy-permitting package was dropped from must-pass government funding legislation in the Senate earlier this year after it became apparent it didn’t a have the votes.

--With assistance from Steven T. Dennis and Roxana Tiron.