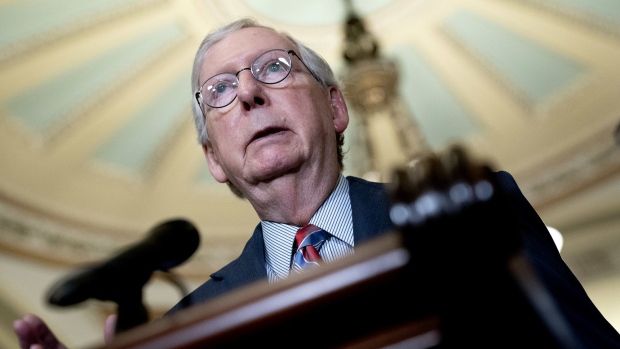 (Bloomberg) -- Senate Minority Leader Mitch McConnell rejected an appeal by Treasury Secretary Janet Yellen, made in a phone call, for Republicans to join with Democrats in raising the federal debt ceiling, leaving the two sides at odds with potentially weeks to go until the limit is breached.

“The leader repeated to Secretary Yellen what he has said publicly since July: This is a unified Democrat government, engaging in a partisan reckless tax and spending spree,” McConnell spokesman Doug Andres said Thursday. “They will have to raise the debt ceiling on their own and they have the tools to do it.”

Yellen has urged Congress to increase the debt limit as soon as possible, warning that the Treasury’s extraordinary measures to avoid breaching the ceiling could run out as soon as October.

The Treasury chief will “continue to talk to Republicans and Democrats about the critical need to swiftly address the debt ceiling in a bipartisan manner, to avoid the catastrophic economic consequences of default,” Lily Adams, principal deputy assistant secretary Treasury, told Punchbowl News, which earlier reported Yellen’s call to McConnell.

On Wednesday, McConnell tweeted that raising the debt limit was the “sole responsiblity” of the Democrats.

Democratic congressional leaders have highlighted that the Democrats joined Republicans in suspending the debt ceiling under GOP President Donald Trump. The administration has also flagged that much of the increase in debt since the last, two-year agreement to set the limit aside has come from Republicans’ tax cuts and emergency spending due to the pandemic.

Republicans have tied their hard-line position to opposition to the $3.5 trillion tax and social spending package that Democrats are now working to push through Congress via a budget reconciliation bill -- a fast-track process that bypasses the filibuster, removing the need for Republican support in the Senate.

Congressional Democrats could use that fast-track procedure to raise the debt ceiling without Republican support, but they have decided against doing so.