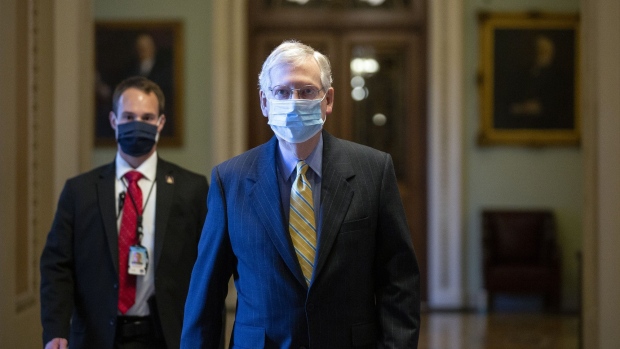 President Donald Trump said he wants an even bigger stimulus than what Democrats have offered so far, yet another turnabout in his position and one that seemed to undercut his own negotiators.

“I would like to see a bigger stimulus package, frankly, than either the Democrats or the Republicans are offering,” Trump said on Rush Limbaugh’s radio program, saying he’s going in the “exact opposite” direction from his earlier stances.

Treasury Secretary Steven Mnuchin headed into talks with House Speaker Nancy Pelosi on Friday carrying a White House offer of US$1.8 trillion for economic stimulus, according to people familiar with the matter. The two spoke for about 30 minutes and Mnuchin’s proposal “attempted to address some of the concerns Democrats have,” Pelosi spokesman Drew Hammill said on Twitter.

Pelosi has proposed a US$2.2 trillion plan, down from the US$3.4 trillion package the House passed in May, but the differences between the two sides involve more than money. They also differ on how it should be spent.

The speaker in Friday’s conversation pressed the administration to include language in the bill on developing a “strategic plan” to combat the virus. There has been resistance to doing this from the White House which has claimed it has such a plan already.

Another hurdle is that many Republicans in Congress have said they would oppose any plan approaching US$2 trillion, but Trump on Friday indicated he wasn’t concerned about that.

“I’m telling you something I don’t tell anybody else because maybe it helps or maybe it hurts negotiations,” Trump told Limbaugh. “I would like to see a bigger package.”

It’s an about-face by Trump, who said Tuesday he was pulling out of the pandemic relief talks. It comes with the election three weeks away and polls showing him trailing Democrat Joe Biden.

His actions demonstrate that politically he needs a deal, according to one Senate GOP aide. The aide said that if Trump can get an agreement for less than US$2 trillion, it would be hard for Senate Majority Leader Mitch McConnell not to put it up for a vote. But the president’s statement could also harden Pelosi’s demand for a bigger stimulus.

Stocks had climbed to session highs on Friday on the first reports of the White House upping its offer on coronavirus relief, but failed to gain further steam from Trump’s latest twist. The S&P 500 Index was up 0.8 per cent as of 3:06 p.m.

There is still skepticism about whether a deal can be cut and transformed into legislation before Election Day.

McConnell said earlier Friday that there’s probably not enough time before the election to bridge the “vast” differences on a new virus relief package.

“I believe that we do need another rescue package, but the proximity to the elections and the differences of opinion about what is needed are pretty vast,” McConnell said at an event in his home state of Kentucky.

McConnell later told reporters that “even if an agreement” on stimulus is reached, his first priority is securing Senate confirmation of Trump’s nominee for the Supreme Court. Hearings for Amy Coney Barrett are scheduled to begin Monday with a final Senate vote as soon as the week of Oct. 26.

If Pelosi and Mnuchin get an agreement, Congress would then likely need two weeks or more to draft legislative text and approve it in the House and Senate. The Senate is on recess until Oct. 19 and the House until mid-November, but lawmakers have been told they can be called back with 24 hours notice to vote on any stimulus deal.

If it did come to a vote, Republican lawmakers may be a major obstacle.

McConnell has said that there are members of his Senate GOP majority who think the government has already provided enough stimulus. House Republican leader Kevin McCarthy has also said his caucus members are skeptical of a large package. “We’d have to see what’s in it, but I think it’s difficult,” he said last month.

In his remarks Friday, McConnell specifically highlighted the “narrowly targeted” GOP package of about a half-trillion dollars that Democrats blocked as insufficient last month.

“The Administration does not share this priority of crushing the virus. The President does not have the capacity, leadership or plan for testing, tracing, and isolation that is needed,” Pelosi wrote. “Instead, Trump’s delay, denial, distortion of reality and disdain for science has exacted a deadly and preventable human toll.”

The two sides are are divided on the issues of how much money to provide state and local governments, language restricting Trump’s ability to divert anti-virus health care spending and the level and length of supplemental unemployment benefits. Dozens of smaller issues such as funding for election security and the Postal Service also remain.

The negotiations are proceeding against a frenzied backdrop, with the president recuperating from COVID-19 and the final stretch of the election campaign under way. Pelosi and Trump publicly questioned each other’s ability to perform their jobs on Thursday.