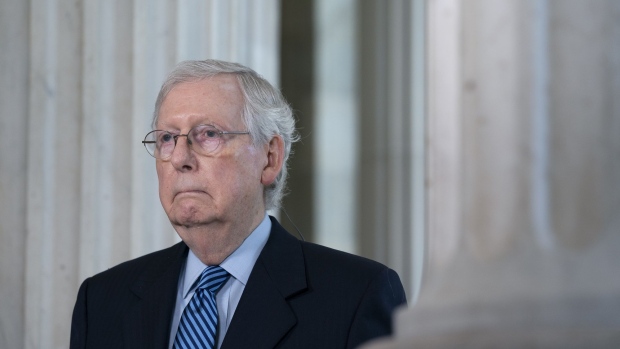 Senate Majority Leader Mitch McConnell, a Republican from Kentucky, listens during a television interview at the Russell Senate Office Building in Washington, D.C., U.S. on Thursday, Oct. 1, 2020. U.S. House Speaker Nancy Pelosi said there are still major differences to be bridged in the negotiations over a fiscal stimulus package with Treasury Secretary Steven Mnuchin. , Bloomberg

The votes, essentially one-chamber messaging, will underscore the continued deep differences after months of talks on another stimulus bill that have failed to bridge gaps between President Donald Trump’s administration, House Democrats, and Senate Republicans.

McConnell, who previously said the Senate would take action during the week of Oct. 19, spelled out schedule details on Saturday. A standalone vote on more funds for the Paycheck Protection Program will be held on Tuesday, followed by the main relief bill on Wednesday, he said in a statement.

“Republicans have tried numerous times to secure bipartisan agreement where possible and get aid out the door while these endless talks continue,” said McConnell, blaming House Speaker Nancy Pelosi for the aid impasse. “Next week, Senate Republicans will move to break this logjam.”

McConnell has raised his own objection to any deal -- the amount. Trump said Thursday he was prepared to go above the $1.8 trillion his team had been trying to offer to Pelosi, who favors a $2.2 trillion plan.

“He’s talking about a much larger amount than I can sell to my members,” McConnell said Thursday of Trump’s latest position.