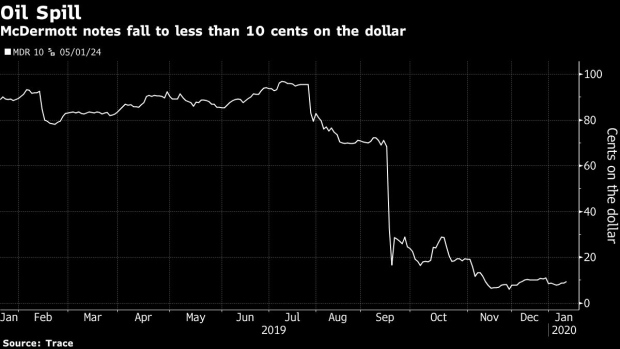 (Bloomberg) -- McDermott International Inc. is preparing to file for bankruptcy as soon as next week to address its more than $4 billion debt load, according to people with knowledge of the matter.

The Houston-based company, which builds oil platforms and gas-export plants for energy producers, is negotiating a restructuring plan that could see its debt converted into equity with existing term-loan lenders getting the majority of the shares, said the people. Unsecured creditors would receive less than 10% of the equity along with warrants, one of the people said.

The terms of the restructuring are still being negotiated and could change, according to the people, who asked not to be identified because the talks are private. Baupost Group and HPS Investment Partners may provide a bankruptcy loan of about $2 billion, the people said.

Representatives for McDermott and HPS declined to comment. A representative for Baupost didn’t immediately respond to requests for comment.

McDermott has been under significant pressure since September, when its stock and bonds plunged on news that it had hired turnaround advisers. The company has struggled to integrate its acquisition of Chicago Bridge & Iron Co. and clear a backlog of projects, crimping earnings.

Late last year the company secured part of a $1.7 billion rescue financing package and entered into a forbearance agreement with some of its lenders, but that relief period expired Jan. 15. Its credit agreements were amended so that acceleration of its bonds wouldn’t constitute a default through Jan. 21. On Friday, its 2024 bonds were trading around 9.5 cents on the dollar, according to Trace bond-trading data.

McDermott has also been trying to shore up liquidity through a sale of its Lummus Technology business. The company previously said it had received unsolicited bids to acquire all or parts of Lummus with a valuation exceeding $2.5 billion.

To contact the editors responsible for this story: Rick Green at rgreen18@bloomberg.net, Boris Korby, Nicole Bullock