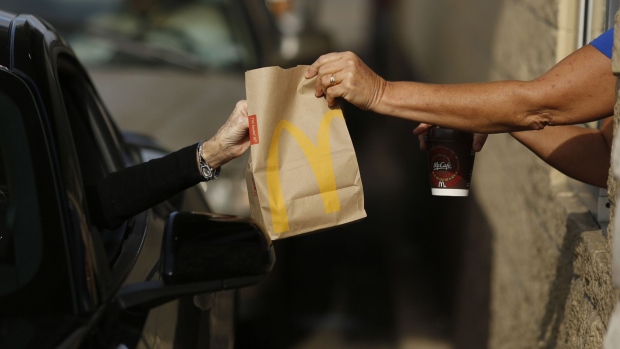 (Bloomberg) -- Prices on virtually all types of food and consumer goods are going up -- and many Americans don’t seem to mind.

McDonald’s Corp. and Coca-Cola Co. shares jumped Wednesday after the companies reported rising demand even in the face of price hikes. The restaurant chain, in particular, pointed to higher menu prices in the U.S. boosting comparable sales almost 10%, above Wall Street’s expectations.

“We haven’t seen, I’ll say, any more resistance to our price increases than we’ve seen historically,” McDonald’s Chief Financial Officer Kevin Ozan said on a conference call with analysts. The company, which boosted menu prices 6% recently, uses third-party firms and customer surveys to help it determine prices and gauge sentiment. The latest bump “has been pretty well received by customers.”

Inflation in the U.S. has jumped the most this year since 2008 as companies grapple with a mix of challenges, from higher commodity costs to snarled global supply lines to labor shortages.

See also: Everything’s expensive now, but it’s only getting worse

So far, consumers are taking it in stride. Kraft Heinz Co.’s organic sales unexpectedly climbed last quarter and profit topped expectations as the company balanced higher expenses with price increases -- without alienating consumers. On a conference call Wednesday morning with Kraft Heinz leaders, one analyst congratulated the company for walking that line on prices.

Coca-Cola, similarly, has raised prices and said it will continue to do so to counter higher costs into next year.

McDonald’s shares rose as much as 3.5% Wednesday, the biggest intraday gain in seven months, while Coca-Cola climbed the most since July. Kraft Heinz was little changed.