McDonald’s Corp. fired Chief Executive Officer Steve Easterbrook because he had a consensual relationship with an employee, losing the strategist who led the company’s charge into online ordering and delivery.

The burger chain’s board voted Friday to terminate Easterbrook, 52, after investigating the relationship, which violated company policy, according to a statement Sunday. McDonald’s policy doesn’t allow the CEO to have a relationship with anyone in the company. Chris Kempczinski, who runs U.S. operations, was promoted to president and CEO.

“This was a mistake,” Easterbrook said of his actions in an email sent to employees. “Given the values of the company, I agree with the board that it is time for me to move on.”

McDonald’s shares fell as much as 2.3 per cent in pre-market trading Monday. The stock had almost doubled since Easterbrook took over in March 2015, more than twice the gain in the S&P 500 Index, giving the company a market capitalization of US$147 billion.

Easterbrook was seen as relentless in his push to capture a new generation of customers who would be willing to order through smartphone apps, pay online, and choose to have food delivered to home or work instead of venturing into the outlets. To stress urgency, he tied executives’ compensation to the speed and breadth of the delivery rollout, and worked with vendors including UberEats.

His strategies are paying off: Same-store sales, a key metric of success, recovered with the arrival of all-day breakfast, and he axed poorly selling items and added new ones while creating lower priced value menus to draw in diners.

“You can make a very strong argument that Easterbrook was the best CEO in the restaurant industry,” said Michael Halen, who covers the sector for Bloomberg Intelligence.

Along the way, Easterbrook’s changes caused some franchisees to chafe at the expenses being pushed down from the corporate headquarters in Chicago.

McDonald’s independent group of franchisees, the National Owners Association, didn’t immediately reply to requests for comment. Store owners are scheduling a private conference call to discuss how to respond and protect the brand, according to a person familiar with their plan who asked not to be identified.

“Large public companies are less likely to tolerate such behavior because of reputational risk concerns,” said Yuen Teen Mak, a professor at NUS Business School in Singapore wrote in an email. “The nature of the business may also be a factor -- after all, their target customers are families and children.”

Regardless of Easterbrook’s successes, the company’s board had little room for error in how it handled the British executive’s transgression at a time when even consensual relationships draw scrutiny -- and especially when there’s an imbalance of power. In May, the company revamped its harassment policy after coming under pressure from employees, labour advocates and members of Congress.

In a letter responding to an inquiry from U.S. Senator Tammy Duckworth, from the chain’s home state of Illinois, Easterbrook said the company has improved its policy and is committed “to ensuring a harassment and bias-free workplace.” 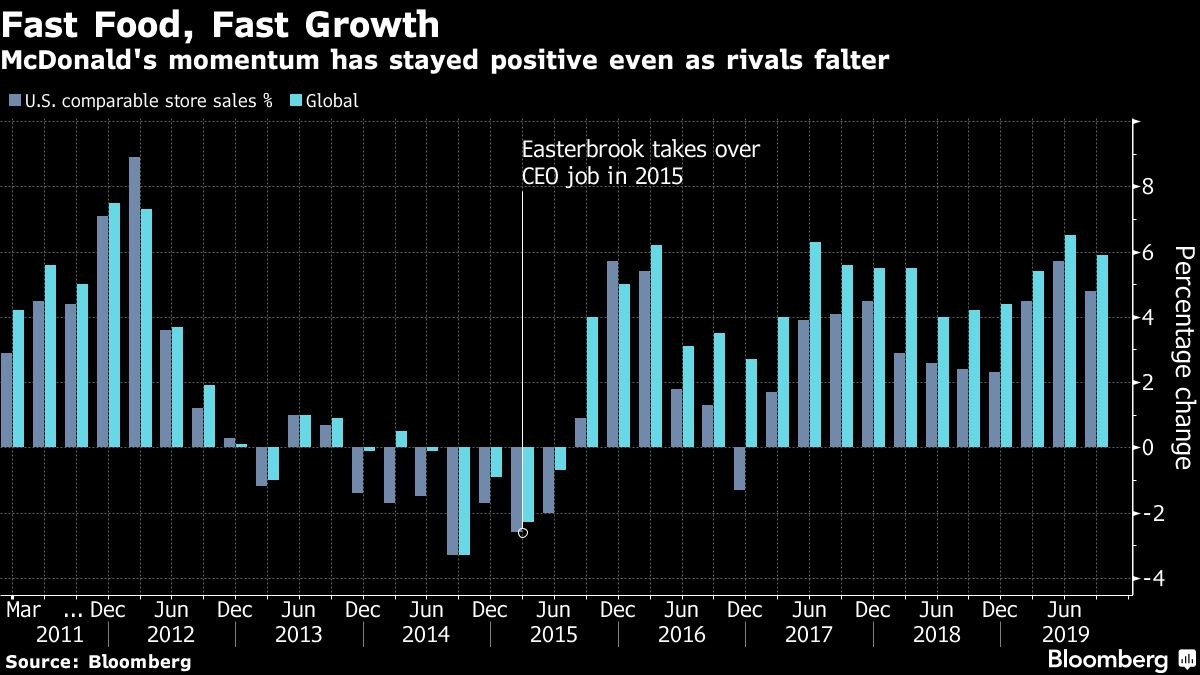 “In the current #MeToo climate, it will be even more difficult for corporations to retain a CEO in such situations,” said NUS’ Mak. “It is absolutely the right thing for McDonald’s to do and to do it swiftly.”

For the first time in 19 years, more CEOs were dismissed for ethical lapses than for financial performance or board struggles in 2018, according to a study by one of the PriceWaterhouseCooper’s units that analyzed CEO turnovers in the world’s 2,500 largest companies.

Executives who depart after violating company policy typically don’t get to collect severance and must forfeit any unvested long-term compensation. Easterbrook held unvested shares and stock options worth roughly US$31.3 million as of Friday’s close in New York, according to data compiled by Bloomberg.

Easterbrook is divorced, according to a report in the Wall Street Journal, and also sits on the board of Walmart Inc.

​At the time, the American Civil Liberties Union and the union-backed Fight For US$15 just announced a handful of new lawsuits and 20 complaints to the U.S. Equal Employment Opportunity Commission. They accused the company of failing to prevent misconduct including groping and inappropriate comments from supervisors, as well as retaliation for speaking up.

With Easterbrook now out of the picture, it’s left to Kempczinski to continue the push into delivery and electronic ordering. He joined McDonald’s in 2015 to oversee global strategy, business development and innovation. He most recently served as president of the U.S. business and, like Easterbrook, was deeply involved in the drive to expand online delivery.

“Chris has been an important partner to me over the last four years and is the ideal person to take on the role of CEO,” Easterbrook said in his departure note. Joe Erlinger, who joined the company in 2002, will become president of the U.S. business.

Kempczinski, who helped implement many of the recent changes as head of U.S. operations, will maintain his predecessor’s focus on technology and believes the company’s investments will pay off, according to an interview with the Wall Street Journal.

“There isn’t going to be some radical, strategic shift. The plan is working,” the new CEO told the Journal, adding that he wants to discuss any concerns with franchisees.

Kempczinski, who’s also joining McDonald’s board, is taking over a behemoth chain, with more than 38,000 locations in 100 countries, including 14,000 in the U.S.

He’ll have to contend with stagnant customer traffic across the restaurant industry. Growth has been fueled in recent quarters by higher prices, but chains have struggled to bring in larger volumes of diners. Competition has intensified as consumers eat out less and buy more prepared foods from grocery stores.

In recent quarters, McDonald’s has been one of the industry’s best performers, with same-store sales rising 5.9 per cent globally in the latest quarter, more than analysts had projected.

It hasn’t been quite as easy in its home market, where heavy discounting by rivals and more competition at breakfast has made it harder to get customers in its doors, resulting in a slowdown in customer traffic last quarter. But those who do come in are spending more and more, keeping the company on comfortable footing.

The company has sought to renovate its image by remodeling its locations -- but franchisees have complained about the high costs associated with changes like building a wall to hide the kitchen operations behind the cash registers. In 2018, it slowed the pace of remodels, letting operators complete them by 2022 instead of the initial goal of 2020.

The improvements have also included self-ordering kiosks and even extra drive-thru lanes in some locations.

While the company’s fundamentals are solid, the CEO change could presage additional disruption, Piper Jaffray analyst Nicole Miller Regan said in a note.

“Our experience leads us to take a more cautionary view, noting the potential lack of momentum and time involved in formalizing a new team,” she said.

--With assistance from Hailey Waller, Anders Melin and Ari Altstedter.