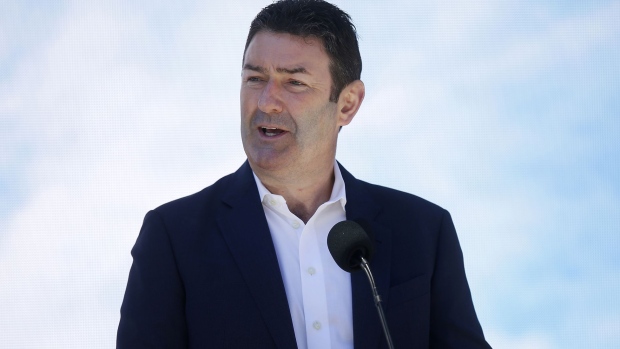 Steve Easterbrook, chief executive officer of McDonald's Corp., speaks during the opening of the company's new headquarters in Chicago, Illinois, U.S., on Monday, June 4, 2018. Easterbrook said that the headquarters move to Chicago will help draw talent to the company. , Photographer: Joshua Lott/Bloomberg

Former McDonald’s Corp. Chief Executive Officer Steve Easterbrook said the restaurant chain shouldn’t be allowed to claw back US$37 million of stock grants in his severance because the company got the “benefit of the bargain” in negotiating his departure.

Easterbrook –- ousted in November over a sexual relationship with an underling -- complied with the demands in his McDonald’s severance agreement and it would be unfair to make him return what amounts to most of the deal’s proceeds, according to a filing by his lawyer Friday in a Delaware Chancery Court.

“McDonald’s stated purpose for presenting the separation agreement to Stephen Easterbrook was to avoid litigation,” Daniel Herr, his lawyer, said in the filing. “But McDonald’s current position creates infinite possibilities for litigation.”

The fight over Easterbrook’s compensation has become one of the highest-profile examples of a big-name corporation grappling with the #MeToo era. The filing comes in response to officials at McDonald’s claiming Easterbrook misled them about how many subordinates he had sexual relationships with and should be forced to hand over the stock.

“Steve Easterbrook lied and destroyed evidence to conceal his inappropriate conduct and impede the investigation into his behavior,” McDonald’s said Friday. “He cannot hide behind baseless technical arguments. We will pursue him and the return of his severance payment.”

Easterbrook counters that McDonald’s knew about his multiple relationships at the time they negotiated the severance package. He also said that the chain filed its lawsuit in the wrong state, because agreements covering stock grants require a dispute be heard in Illinois.

The company, second in the world in number of global locations only to Subway Restaurants, says its bylaws require claims against executives and directors be heard in Delaware, the corporate home to more than 60 per cent of Fortune 500 companies. Chancery court is the nation’s prime venue for the resolution of high-profile corporate disputes.

The severance pact required Easterbrook to agree not to work for specific competing competitors for a period of time, give McDonald’s continued rights to his likeness, and that he write an “apology letter” to his former colleagues over the affairs, according to the filing.