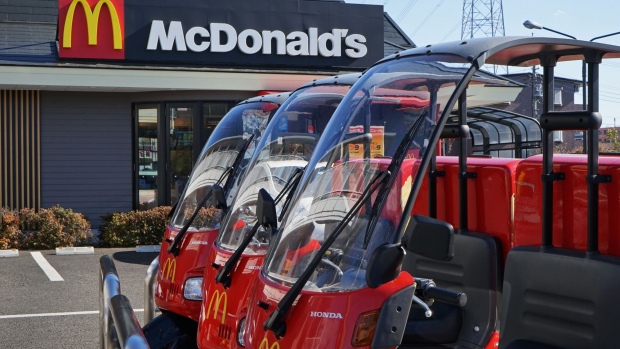 (Bloomberg) -- McDonald’s Holdings Co. Japan will raise menu prices for the second time this year, joining a growing number of businesses passing on the impact of the weakening yen and the highest inflation in decades to consumers.

The fast-food chain will raise the price of about 60% of its products by 10 to 30 yen ($0.07-$0.21) from Sept. 30., it said in a statement Monday. The company, which operates stores for Chicago-based McDonald’s Corp., said it has been affected by “a recent surge in raw material prices, rising labor, logistics and energy costs, as well as rapid exchange rate fluctuations.”

While inflation in Asia’s second-largest economy has remained relatively subdued compared to other developed economies worldwide, it still reached a 31-year high of 2.8% in August amid surging energy costs from Russia’s war in Ukraine and supply chain snarls.

Businesses in Japan have also been hit by the rapidly plunging value of the yen, amid a resurgent dollar and ultra-dovish stance of the central bank, especially import-reliant companies like McDonald’s, which uses potatoes from North America for its fries.

McDonald’s previously raised the price of around 20% of its Japan menu items in March, citing factors such as the rising cost of beef and wheat, although it didn’t affect products like the Big Mac.