McCreath: What to expect from Starbucks, McDonald's and Cheesecake Factory's quarterly earnings

Comparable-store sales in the second quarter rose almost 41 per cent globally from a year earlier, outpacing the 39 per cent gain that analysts expected. By the same measure, McDonald’s also beat Wall Street projections in the U.S. and its international markets.

For the full year, McDonald’s expects operating margin to be in the low-to-mid 40 per cent range -- meaning that the metric will likely dip from last quarter’s reading of more than 45 per cent. Though sales are bouncing back, restaurants are under pressure as they come out of the pandemic, with costs rising for everything from labor and equipment to food and packaging.

McDonald’s will also see higher costs as it reopens dining rooms. In an email, the company said about 70 per cent of its U.S. dining rooms are open -- but that’s expected to rise to nearly 100 per cent by Labor Day, barring COVID resurgences. 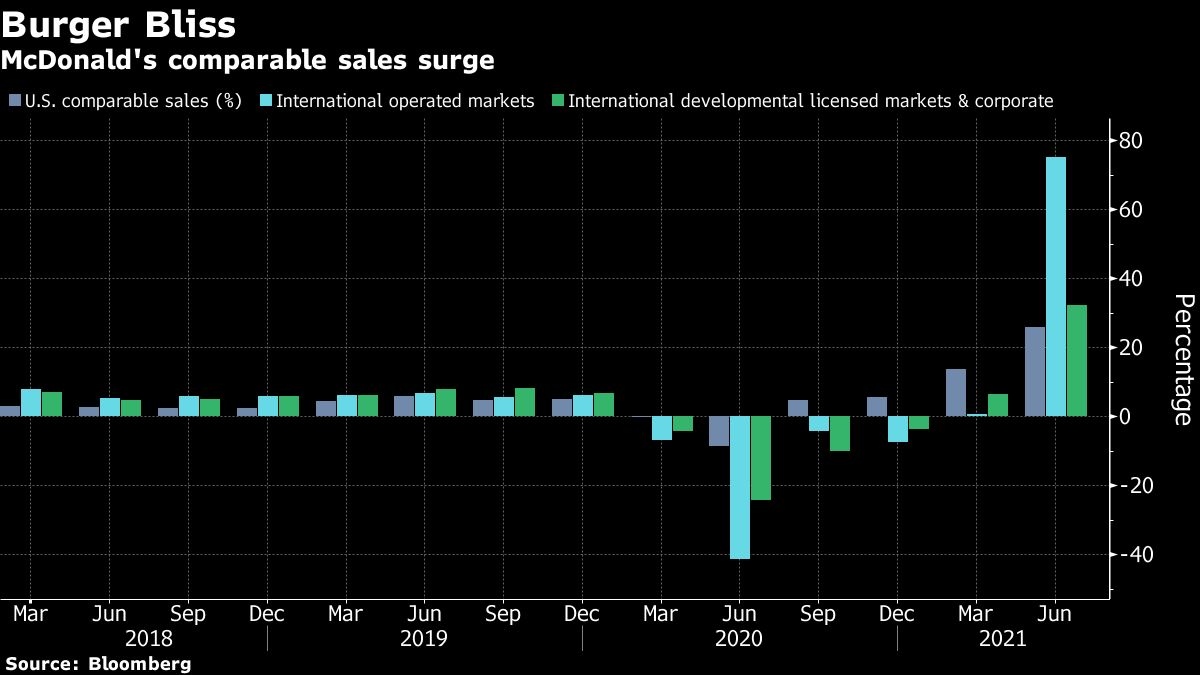 Overall, the results underscore how McDonald’s has emerged from the pandemic stronger, underpinned by drive-thru orders, carryout and, increasingly, delivery. McDonald’s said that online and mobile orders in its top six markets climbed 70 per cent year-to-date, showing that the Chicago-based company’s investment in the area appears to be paying off.

In the U.S., where McDonald’s has nearly 14,000 locations, sales were helped by a new chicken sandwich. Revenue was boosted by “strong average check growth driven by larger order size and menu price increases,” the company said in a statement Wednesday. A new “celebrity” meal offering, chosen this time by the South Korean boy band BTS, fueled results across the globe.

Revenue rose 57 per cent to US$5.89 billion in the quarter, while adjusted earnings increased to US$2.37 a share, exceeding analysts’ projections of US$2.10.

The company may face a new round of COVID-related restrictions, however, as cases once again climb in much of the world, fueled by the contagious delta variant.

McDonald’s order times have slowed due to staffing problems in restaurants. While the labor shortage is improving as enhanced unemployment benefits end across the U.S., it’s still a struggle to get enough workers willing to cook burgers, CEO Chris Kempczinski said during an earning conference Wednesday.

The company in May announced pay raises in its home market to help attract and retain workers, bringing average hourly pay at company restaurants to more than US$13.