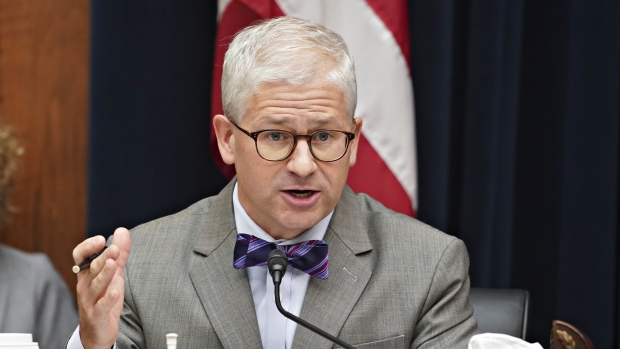 Representative Patrick McHenry, a Republican of North Carolina and ranking member of the House Financial Services Committee, speaks during a hearing in Washington, D.C., U.S., on Thursday, Sept. 30, 2021. The Treasury secretary this week warned in a letter to congressional leaders that her department will effectively run out of cash around Oct. 18 unless Congress suspends or increases the debt limit. , Bloomberg

McHenry, who has emerged as a critical player in the House’s narrow GOP majority, warned Republicans of the ramifications of a catastrophic debt default, arguing that behaving recklessly could lead to the US losing its position as the world’s dominant reserve currency.

Spokespeople for McHenry and McCarthy did not immediately respond to requests for comment.

The nation reached its debt ceiling on Thursday but has about $500 billion of extraordinary measures available that will allow the US to dodge a default for the next several months, buying Congress time to strike a deal on raising the debt limit. Without an agreement, the US risk debt default sometime after June.

McHenry Becomes Republican to Watch in US Debt-Limit Showdown

Republican leaders at the meeting discussed the importance of differentiating themselves from controversial proposals offered by the conservative Republican Study Committee and Republican Senator Rick Scott of Florida. The RSC has proposed raising the eligibility age for Medicare and Social Security programs, while Scott wants to switch the popular programs from permanent entitlements to temporary programs renewed every five years by Congress.

House GOP leaders underscored at the meeting they will not cut Medicare, Medicaid or Social Security, the person said.

Last week McCarthy told reporters that saving those entitlement programs should be part of the debt ceiling discussion. To avoid insolvency for the Medicare hospital trust fund and Social Security trust fund, either taxes must be raised or benefits curtailed.