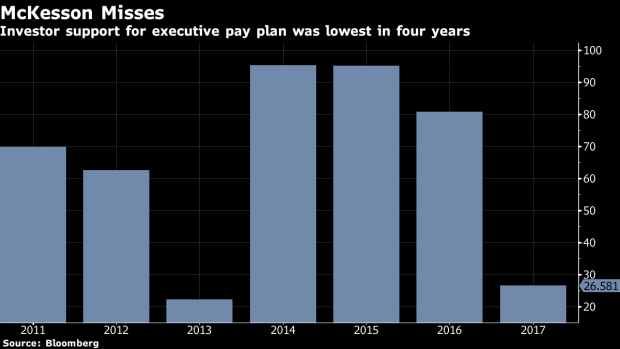 The International Brotherhood of Teamsters led a vote-no campaign in 2017 against the firm’s executive pay plan after accusing the drug distributor of aggravating the opioid epidemic. Last year’s pay package received 26.6 percent support, the second-lowest to date and among the worst of S&P 500 companies.

Hammergren, 59, received a reported pay package of $18.1 million for the last fiscal year, including a $1.68 million salary, a $3.48 million cash bonus, a long-term cash payout of $570,000 and equity awards of $11.8 million. He forfeited a $7.32 million target performance award from 2016 after the firm posted returns that trailed those of the S&P 500 Health Care Sector Index over the past three years.

Shareholders will vote on the pay package at the firm’s annual meeting July 25.

To contact the reporter on this story: Alicia Ritcey in New York at aritcey@bloomberg.net

To contact the editors responsible for this story: Pierre Paulden at ppaulden@bloomberg.net, Steven Crabill, Drew Armstrong