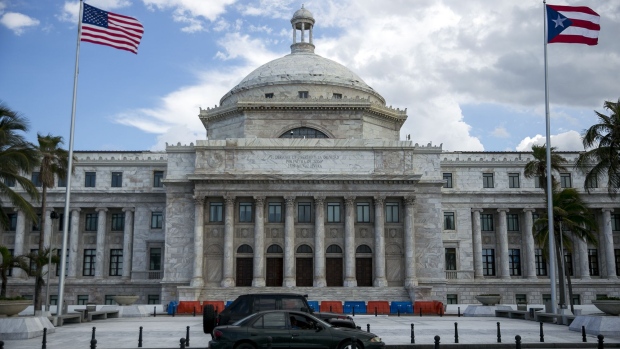 American and Puerto Rican flags fly outside the Capitol of Puerto Rico building in San Juan, Puerto Rico, on Saturday, May 13, 2017. With Wall Street's help, the U.S. commonwealth borrowed tens of billions in the bond markets, only to squander much of it on grand projects, government bureaucracy, everyday expenses and worse. Debts were piled on debts, even as the economy gave way. , Bloomberg

(Bloomberg) -- A coalition of community groups is asking the judge overseeing Puerto Rico’s historic bankruptcy to withhold additional payments to McKinsey & Co. for its work on the island’s debt restructuring, alleging the management-consulting firm has conflicts of interest that it has failed to fully disclose.

In a letter sent this week to US District Court Judge Laura Taylor Swain, a group called Power 4 Puerto Rico said McKinsey’s final fee application should be denied, citing the court’s prerogative under the Puerto Rico Recovery Accuracy in Disclosures Act of 2021, or PRRADA.

As a consultant to the federally appointed Financial Oversight and Management Board, or FOMB, McKinsey has run up a tab of $120 million helping the panel oversee the territory’s finances, according to a Wall Street Journal story last month. At the same time, the company helped the board review high-profile public contracts that ultimately went to McKinsey clients.

Puerto Rico’s bankruptcy is the largest ever in the US municipal bond market, and legal and professional fees alone total almost $1 billion.

The oversight board “has allowed for the untransparent procurement of advisors and consultants for millions of dollars while alleging the need to cut payroll for public employees,” Power 4 Puerto Rico said in the letter, which is dated July 28. “The least that should be done is to prevent Puerto Rico’s taxpayer dollars from filling the coffers of consultants that have not complied with PRRADA and their fiduciary responsibility as a consultant.”

McKinsey didn’t immediately respond to an email and call seeking comment on Friday. In the Wall Street Journal’s story last month, a McKinsey spokesperson said the company’s work for the clients in question hasn’t conflicted with its work for the oversight panel.

Power 4 Puerto Rico is a US national coalition that includes the Center for Popular Democracy, Alianza for Progress, the Center for American Progress and the Hispanic National Bar Association.