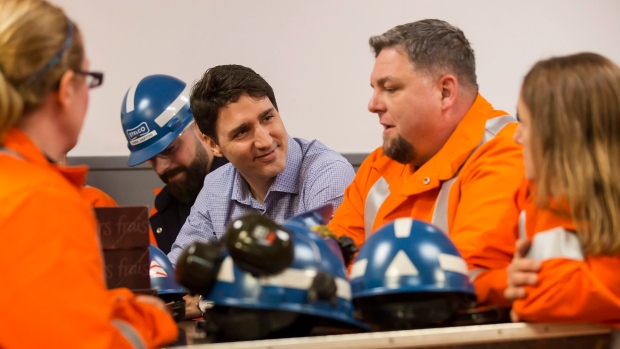 HAMILTON -- Prime Minister Justin Trudeau says he has an array of measures, including tariffs, to prevent the world's producers of cheap steel from using Canada as a back door to slip the metal into the United States.

"We have a whole suite of tariffs and countervailing duties that are at our disposal to move forward and ensure that we are not accepting in unfairly-produced or sold steel into Canada," Trudeau said while at a steel plant.

"As I said to the congressional leadership, as I said to the president last week: We are always happy to better co-ordinate and to work together to do even more to ensure that we are protecting the North American steel industry."

Trudeau said the surplus of steel in the global market is not new and with American tariffs in place, some countries might try to ship to the U.S. through Canada.

However, he said, Canada would be alert to that and work with industry partners and the Americans to make sure that didn't happen.

Trudeau said the national security argument the U.S. has made when it comes to considering tariffs for Canadian steel and aluminum makes no sense -- a refrain he's hammered in recent weeks.

He said he began talking about steel with Trump at the G7 summit in Sicily last year, when he was emphatic that Canada poses no national security threat to the U.S.

"National security issues do not apply -- could not apply to Canada -- when we have our aluminum in their fighter jets, our steel that goes into their armoured vehicles," Trudeau said. "We know that the collaboration on NORAD, the collaboration on national security issues narrow and broadly is something that is really important to both of our countries."

Asked whether he trusted the president, Trudeau said Trump has always kept his word to him and has been consistent in doing what he said he would do.

Trudeau's comments came during a tour of Canadian steel-producing towns, where he is showing support for workers in the industry. On Tuesday, he began his day by touring a Stelco plant in Hamilton, where he chatted with workers and stressed the importance of the industry.

He asked after their families and how they had been coping with the possibility of U.S. tariffs that he had repeatedly said would have a devastating impact in Canada.

Later, at a roundtable with industry leaders, he spoke again of the importance of steel to Hamilton, saying he was there to listen. Following the roundtable, Trudeau headed to a second plant, this time Dofasco, for another tour.

"We're going to ensure that Canadian steel is Canadian steel," he said at Dofasco, where he also promised unspecified measures to better protect workers' pensions where companies go under, downsize substantially, or are otherwise bought out.

Trudeau also expressed optimism about reaching a good North American free-trade agreement that will benefit Canada as well as the U.S. and Mexico -- despite Trump's constant refrain that the current deal is a bad one.

Trump recently exempted Canada and Mexico from tariffs on steel and aluminum, although the U.S. government has been dropping hints that the exception is only temporary.

Some observers saw the tariff threat as an attempt by the Trump administration to pressure Canada and Mexico to complete the NAFTA talks -- giving in to other U.S. demands or giving up some of their own