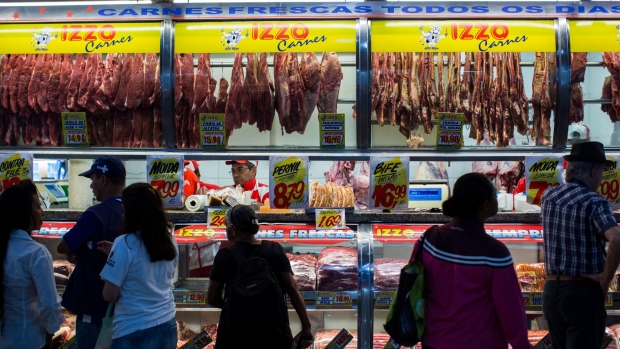 Customers wait to buy meat from at a butchery stall inside a market in Sao Paulo, Brazil, on Saturday, March 18, 2017. Federal authorities announced Friday they're investigating evidence that companies including JBS SA and BRF SA, the nation's largest meat producers, bribed government officials to approve the sale and export of soiled meat. , Bloomberg

The family of a beef plant worker who died because of the coronavirus has brought a wrongful death lawsuit in a Philadelphia court against JBS SA, the world’s biggest meat company.

Ferdinand Benjamin filed the suit on Thursday after his father, Enock Benjamin, died of respiratory failure caused by Covid-19, according to a copy of the timestamped complaint provided by Saltz Mongeluzzi & Bendesky, the law firm representing the family. Enock Benjamin worked at the JBS USA plant in Souderton, Pennsylvania.

“JBS treated workers as expendable and placed them standing shoulder to shoulder without basic protective equipment such as masks,” attorney Robert J. Mongeluzzi said in a statement.

JBS, based in Sao Paulo, didn’t immediately respond to a request for comment on the suit. In a statement earlier this week, the U.S. unit said it was “doing everything possible to provide a safe working environment for our team members.”

The suit may be part of the beginning of a litigation wave against meat companies after thousands of U.S. workers contracted the virus. At least 27 meatpacking workers have died in the coronavirus pandemic, according to the United Food and Commercial Workers International Union.

The family of a meatpacking worker who died brought a wrongful death lawsuit in a Texas state court against Dallas-based Quality Sausage Co. earlier this week.

Smithfield Foods Inc. was sued last month by employees at a rural Missouri pork-processing facility. They argued that the company, owned by Hong Kong-based WH Group Ltd., hadn’t done enough to protect workers from the virus.

U.S. District Judge David Gregory Kays on Tuesday declined to hear the case, saying it’s up to the Occupational Safety and Health Administration and the U.S. Department of Agriculture, not the courts, to oversee safeguards for workers.

The jobs are also low-paying and provide few benefits, further underscoring how labor inequality is one of the most significant rifts brought to the fore by Covid-19.

The Centers for Disease Control and Prevention said last week that conditions at U.S. meat plants contributed to increased risk of infections, and ultimately more than 4,900 workers fell ill. The agency cited difficulty maintaining social distancing and adhering to the heightened cleaning and disinfection guidance among the factors that increased risks for workers.

Workers at meat plants represent some of the U.S. populations facing a disproportionate hit from the health crisis and the economic fallout. About half are immigrants, according to the Center for Economic and Policy Research. Employees also come from relatively low-income families, and about 44% of them are Hispanic and a quarter are African Americans, a demographic seeing a devastating toll both physically and financially.

Benjamin’s suit alleges that JBS failed to provide sufficient personal protective equipment and forced workers into close proximity. Employees faced cramped and crowded work areas, break areas, restrooms and hallways, and workers were discouraged from taking sick leave in a manner suggesting jobs might be lost, according to the suit.

The company was alleged in the suit to have failed to provide proper testing and monitoring for individuals who have may have been exposed to the virus.

The suit also notes that JBS increased production at its Souderton facility in March and added a weekend shift amid an increase in meat demand.

“While it could have devoted weekends to disinfecting the plant,” the company “instead added what it called a ‘Saturday Kill’ to increase production and its bottom line,” Steven Wigrizer, a partner at the law firm representing the family, said in the statement.

Operations slowed at the Souderton plant after several senior managers displayed flu-like symptoms, the company said in a March 30 statement. JBS suspended operations at the plant later that week. It was restarted last month. In an email earlier this week, JBS USA said that it is paying about 10% of the workforce -- people deemed vulnerable -- to stay home.

“By early March the virus was firmly established in the Souderton plant,” Benjamin’s suit said. “The culture at JBS Souderton resulted in workers coming to work sick for fear of losing their job if missing multiple days of work.”