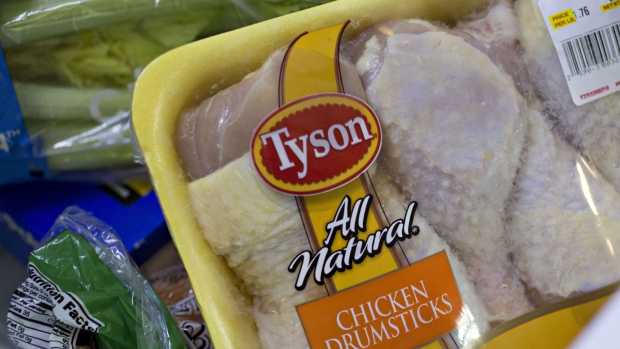 A package of Tyson Foods Inc. chicken is arranged for a photograph in Tiskilwa, Illinois, U.S., on Thursday, May 5, 2016. Photographer: Daniel Acker , Bloomberg

Noel White will step down as chief executive officer after just two years on the job, but will remain at the company as executive vice chairman, Tyson said in a statement Monday. He will be replaced by Dean Banks, currently Tyson’s president, effective Oct. 3.

Tyson’s costs soared as it tried to contain outbreaks of coronavirus that infected thousands of meat-plant employees across America. The company spent an additional $340 million in the third quarter due to the virus and said costs are expected to increase for the remainder of 2020 and into the 2021 fiscal year.

“We have faced and expect to continue to face capacity utilization slowdowns in production facilities from team member absenteeism and choices we make to ensure team member health and safety,” the company said. “The lower levels of productivity and higher costs of production we have experienced will likely continue until Covid-19 is better understood and its impacts diminish.”

Tyson posted third quarter earnings of $1.40 a share, beating the average analyst estimate of 93 cents. Still, revenue of $10 billion missed the average forecast of $10.5 billion, and the company also said the increase in retail volumes couldn’t compensate for the losses from the food services sector as restaurants shut down.

The company also said it couldn’t quantify the total impact of the virus on its operations. As a result, it didn’t provide guidance for margins in each of its sectors.

Tyson was one of the first companies forced to temporarily close a U.S. meat-processing plant as workers started catching the virus in April. The company spent millions in worker bonuses and to retrofit plants with more sanitizing stations and plexiglass dividers. Last week, the Springdale, Arkansas-based company said it was adding a chief medical officer position and almost 200 nurses to protect against the virus.

Shares of Tyson were up 0.9% as of 8:21 a.m. New York time in trading before normal market hours.

Major American meat producers including Tyson came under fire last month from Democratic senators over lingering concerns that workers at meat plants are not consistently being spaced apart on production lines. Tyson said in a response to the senators’ investigation that it installed barriers on production lines where “social distancing is not possible.”

The U.S. Department of Agriculture completed a probe of Tyson and other top producers over the surge in beef prices during the pandemic, but avoided any conclusion as to whether the companies manipulated prices.

(Updates with outlook in fourth paragraph.)