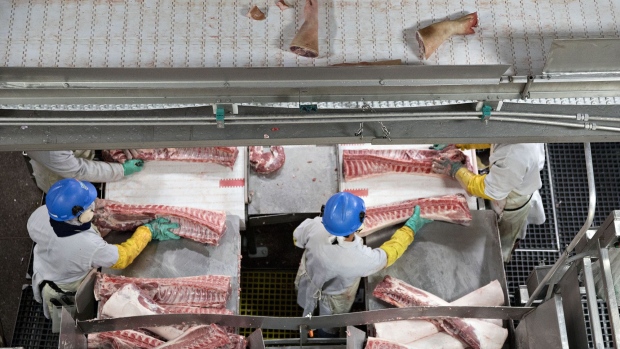 (Bloomberg) -- Meatpacking and poultry processing workers should be among front-line workers next in line for coronavirus vaccines under guidelines approved by a U.S. Centers for Disease Control advisory committee.

Outbreaks of the virus at some plants during the spring caused shutdowns that led to temporary meat shortages, and new cases recently have been emerging at facilities. As many as one in 12 cases of Covid-19 during the early stage of the pandemic in the U.S. can be tied to outbreaks at meatpacking plants and subsequent spread in surrounding communities, according to a study.

Meatpacking companies had been lobbying federal and state officials to prioritize industry workers and the North American Meat Institute, a trade association, welcomed the recommendation as “a critical step for the long-term safety” of employees.

The first round of vaccinations, which started last week, is going mostly to health-care workers and residents of long-term care facilities.

The advisory committee recommendations, released Sunday, include food and agriculture employees in a category of front-line essential workers that will received priority in the second round of vaccinations, along with elderly Americans age 75 and older.

The recommendations put meatpacking workers ahead of Americans age 65 to 74 and younger Americans with medical conditions that put them at risk, who would be a third tranche. The federal guidelines are recommendations only and state governments are allowed to establish their own prioritization for distributing vaccines.

Trade groups including the Household & Commercial Products Association and corporate giants such as Amazon.com Inc. have been jockeying to get their workers prioritized. Their battles could become more local as states set their priorities.

About 24 million health-care workers and long-term care residents fall into the first group eligible for Covid-19 vaccines. The next group, elderly people ages 75 and up, and front-line essential workers, includes an estimated 49 million people.