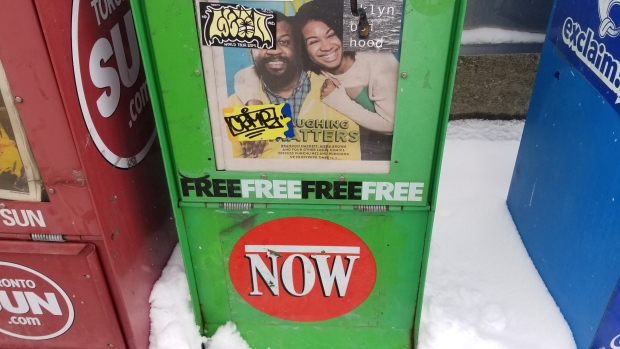 TORONTO - Media Central Corp. Inc. says it has agreed to buy Toronto weekly Now Magazine for as much as $2 million in the first step of a plan to consolidate the alternative publication landscape.

The startup media company said Monday that the magazine will provide it with millions of annual readers through its 500,000 weekly readers and a website that sees more than 729,000 unique visits a month.

Media Central CEO Brian Kalish, whose recent experience is in the speciality finance and health care industries, said Now Magazine is just the first of many alternative publications the company plans to buy in Canada and the U.S. over the next five years as it looks to unite high-quality publications with data-driven advertising.

“I'm confident that we have the ability and we have the plan to go out there and over the next five years, see ourselves controlling at least 60 per cent of that alt market.”

Now Magazine co-founder Alice Klein says it's exciting for the magazine to enter the next stage of its evolution with a young and ambitious media company that is committed to maintaining its independent voice while realizing its potential for growth.

Klein founded the magazine with Michael Hollett in 1981 with a stated vision around social transformation, with special commitments to economic, personal and ecological well-being based on sharing and empowerment for all.

The publication is the second for Toronto-based Media Central, which was founded earlier this year and launched the cannabis-focused online site CannCentral in September.

Kalish said there are no immediate plans to change the Now brand or editorial team, and that they don't want to affect the voice and tone of the publication, but that it plans to add new content categories and integrate the publication with CannCentral.

The cash deal for Now Magazine includes a $1-million payment contingent on Now achieving some metrics within a year of the deal closing. In Now's most recent fiscal year, it reported a loss of $834,352 before deductions on revenue of $4.15 million.

Kalish said he expects to bring Now Magazine, combined with CannCentral, to profitability by the latter half of next year, in part by making better use of the magazine's apparent reader demographics that lean towards “highly creative, upwardly-mobile, socially conscious people.”