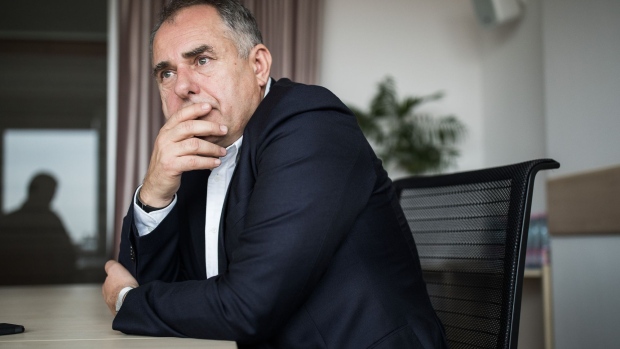 A passenger wearing a protective face mask travels past the parliament building on a tram in Budapest. The coronavirus pandemic has pushed the Hungarian economy into a record recession. , Bloomberg

(Bloomberg) -- Zoltan Varga was on a business trip abroad when his partner called. A helicopter was flying close to their home in a hillside district of Budapest. She was on the terrace with her mother and daughter.

“They were really scared,” Varga said on a video call from his office in Hungary’s capital. “Normally a helicopter is not coming into your garden.”

The incident on Aug. 20 was the most recent in a series of unnerving episodes the 54-year-old owner of one of the country’s biggest independent media groups blames on the government.

Varga said he also saw two men sitting in a car with tinted windows outside his house on a couple of occasions. Over the summer he received two unsolicited offers—one from a Hungarian and another by a foreign investor—to buy his company. Varga believed the two men were intermediaries for Prime Minister Viktor Orban, though he didn’t want to identify them.

The government spokesman’s office declined to respond to Varga’s allegations. “The government doesn’t concern itself with questions relating to the media market,” it said by email. Bertalan Havasi, Orban’s spokesman, didn’t reply to an email seeking a response or answer a call or text message to his mobile phone. Bloomberg wasn’t able to independently corroborate the approaches for Varga’s business, which he described as “friendly.”

Varga’s anxiety may reflect frayed nerves during the coronavirus pandemic, which has pushed the Hungarian economy into a record recession. Yet his concern that he’s the target of intimidation says much about the country under a leader who has extended his influence over the courts, the central bank, education and the media with an unassailable grip not seen since the communist era.

Central Media Group, which Varga founded and has led since 2014, runs 25 print magazine titles and 19 online publications together employing 650 people. They reach half of Hungary’s 10 million population, according to the company. While that might make you an A-lister at government functions elsewhere, he says it makes him a marked man in a nation the European Union is investigating for undermining rule of law and democracy.

In a Bloomberg interview in 2017, Varga spoke with some bravado about his secret to thriving in Orban’s premiership, highlighting his ability to “roll with the punches.” In retrospect, Varga said he was “kind of naïve” back then. He had met Orban once in person after being invited to a meeting and described Orban as a formidable politician who deeply understands and respects power.

“I definitely underestimated how the government is going to pressure the media landscape,” said Varga. By now it’s clear, he said, that “they would like to have definitely a kind of Russia-style controlled media landscape.”

Indeed, it’s a feat that his business has survived this long. This summer was particularly tough for independent media in Hungary.

Index, the country’s most-read news website that was established in 1999, imploded in July after its editor-in-chief was fired for saying that the publication’s independence was at risk. It followed a proposed organizational overhaul after pro-government executives gained influence in the portal. The entire Index staff quit in protest.

On Sept. 11, the state media regulator—led entirely by appointees of Orban’s Fidesz party—said it wouldn’t roll over the license of Hungary’s only opposition radio, Klubradio, citing past irregularities. Klubradio said the decision was an attack against media pluralism.

“The extent of government control in the media makes Hungary completely unique in Europe,” said Gabor Polyak, head of the communications and media studies department at the University of Pecs in southern Hungary.

Hungary plunged to 89th place in the World Press Freedom Index this year from 23rd in 2010 when Orban returned to power with a nationalist agenda that prompted U.S. President Donald Trump to compare him to a “twin brother.”

The government “systematically dismantled media independence, freedom and pluralism, distorted the media market and divided the journalistic community in the country,” according to the latest report by a group of watchdogs including Reporters Without Borders and the  Committee to Protect Journalists. It was published in December following a mission to Hungary.

Orban says his policies are aimed at rolling back the “liberal” forces that dominate Europe. The EU, which extends billions of dollars annually to Hungary to help it catch up with richer western members, has threatened to reduce funding but nothing has come to fruition. Varga said the EU hasn’t done enough to confront Orban ­and has emboldened him by not acting decisively.

Key to Orban’s centralization of power has been the construction of Europe’s biggest propaganda machine, which was sealed in 2018 when nearly 500 media outlets—print, digital, television and radio—were pooled under a foundation with the stated aim to spread Orban’s brand of politics.

While independent outlets remain, their numbers are dwindling. Varga’s businesses, including the flagship Central Media Group, are among the survivors. They generated revenue of 20 billion forint ($66 million) last year, he said.

It’s clear that Varga is now a thorn in the side of the leadership. Pro-government outlets started running articles in recent weeks that compared Varga to a “typical red baron,” a term Orban used in the past to describe businessmen with ties to opposition parties such as the socialists.

Journalists at 24.hu have been unfazed, continuing to run stories that included critical coverage of the government, including about cronyism among the ruling elite.

For Orban, that comes as he battles a resurgence of the coronavirus pandemic and the recession, one whose fallout may well be felt in 2022, when he will seek a fourth consecutive term. Opposition parties have vowed to field joint candidates after an alliance at local elections last year dealt Orban his biggest setback at the ballot box in a decade.

Varga said it’s now a matter of principle for him to hold on to his business. He won’t be selling. “I have a moral obligation not to do this,” Varga said. “I am a successful business person and can afford it. It is not nice being attacked, but I think I don’t have any other option.”