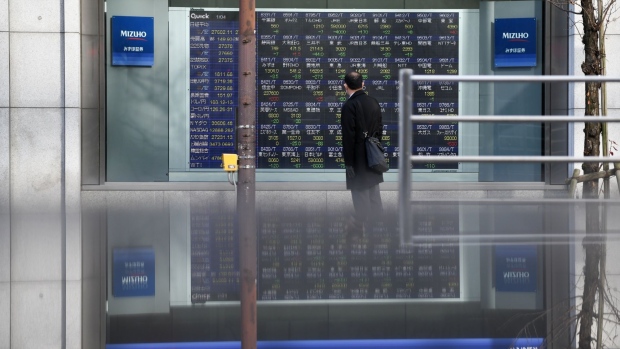 A pedestrian looks at an electronic stock board outside a securities firm in Tokyo, Japan, on Monday, Jan. 4, 2021. Asian stocks climbed to a new record, as technology shares remained strong in the first session of 2021. Photographer: Noriko Hayashi/Bloomberg , Bloomberg

(Bloomberg) -- Shares of Japan’s PHC Holdings Corp. fell in their Tokyo trading debut after being sold at the bottom of a marketed range in the nation’s biggest initial public offering since 2018.

The medical devices maker fell as much as 15% to 2,753 yen per share. They were priced at 3,250 yen apiece, the bottom of a range that went as high as 3,500 yen, after being lowered from a previous indicative level.

The company and its shareholders, including Panasonic Corp. and Mitsui & Co., raised about 71.8 billion yen ($634 million) in the IPO making it the biggest listing in Japan since SoftBank Group Corp.’s mobile phone unit SoftBank Corp. debuted in December 2018.

PHC’s share sale comes as sentiment in Japan’s stock market has shifted from euphoria over the departure of former Prime Minister Yoshihide Suga to concern over replacement Fumio Kishida’s talk of income redistribution and higher taxes. The Nikkei 225 Stock Average has retreated about 8% since peaking at its highest level in more than three decades on Sept. 14.

About $4.7 billion has been raised through IPOs in Japan so far this year, a 182% increase over the same period in 2020, data compiled by Bloomberg show. Most of the 83 companies that listed since January raised less than $100 million each, a common trend in the market in recent years. Initially, PHC and its shareholders were looking to raise as much as $1.6 billion with the offering.

PHC plans to use the proceeds for purposes such as strengthening its distribution networks in the diabetes management segment, increasing production capacity in life sciences and paying down debt.