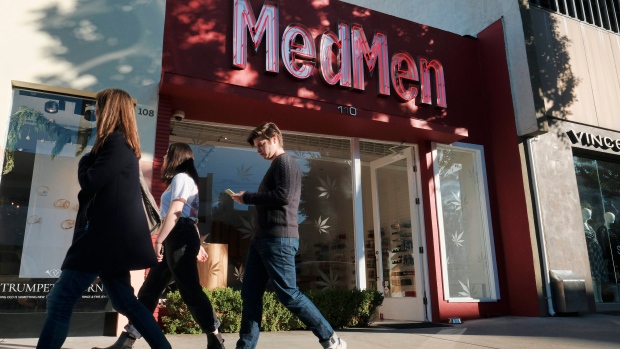 In this Thursday, Dec. 21, 2017, file photo pedestrians walk past one of the MedMen marijuana dispensaries in Los Angeles. , AP Photo/Richard Vogel, File

Cash-strapped MedMen Enterprises Inc. is laying off more than 190 employees, including 20 per cent of its corporate workforce.

The move is part of a broader corporate restructuring, with the pot company targeting positive earnings before interest, taxes, depreciation and amortization by the end of 2020.

MedMen will also divest non-core assets, including the sale of its stake in Treehouse Real Estate Investment Trust for net proceeds of US$14 million. MedMen created Treehouse last year, starting a trend that has seen several other pot companies spin off their real estate into separate companies.

The industry is in the midst of a “harsh and quick” transition from growth to retrenchment, MedMen Chief Executive Officer Adam Bierman said in an interview. Like many other companies in the industry, MedMen’s share price has fallen by about two-thirds since the beginning of the year, and “capital markets have been shuttered,” he said.

“We find ourselves in the exact same spot as all of the other competitors across the industry, where nobody’s fully funded because everybody’s been living in this high-growth phase,” Bierman said. “That’s why we’re taking such dramatic measures: I will not allow the company to be exposed where we didn’t act fast enough, staring down this future.”

A recent study of 30 pot firms by trade publication Marijuana Business Daily found that Los Angeles-based MedMen had the weakest cash position, with just over one month of cash coverage.

The company said Friday it will sell its minority stakes in various brands for net proceeds of US$8 million and has engaged Canaccord Genuity Corp. to “explore strategic alternatives” for operations and licenses in non-core markets. It will also limit new store openings in 2020 to stores that have the potential to generate more than US$10 million in revenue within the first 12 months.

The news comes one month after MedMen announced it would scrap its planned acquisition of PharmaCann LLC and terminate Chief Financial Officer Michael Kramer.

As a result of Friday’s moves, MedMen’s selling, general and administrative expense run-rate will fall to US$85 million from US$132 million, Bierman said.

“This is about preserving and protecting, and part of that is bolstering our balance sheet for the times ahead,” he said.