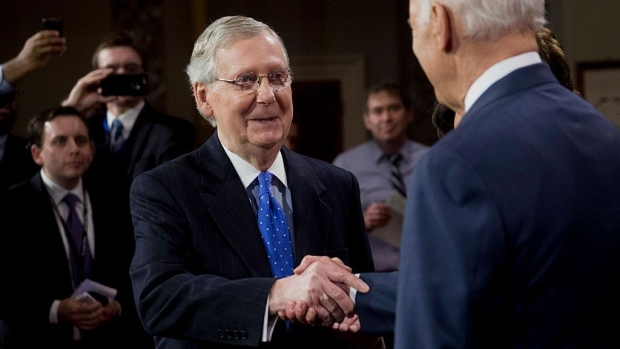 (Bloomberg Opinion) -- Joe Biden has good reasons to be optimistic about winning the presidency as the vote-counting tilts in his favor. Even if he does, many of the fondest hopes of his party and darkest fears of his opponents will be unrealized.

Biden ran with the most progressive program of any major-party nominee in U.S. history, as former president Barack Obama boasted. Many Democrats dreamed of going further still. Biden was going to be the next FDR. Obamacare would be expanded to include the “public option” that eluded Democrats in 2010. The Green New Deal wouldn’t pass, but a down payment on it would. President Donald Trump’s tax cuts would of course be rolled back. New states would be added to the Union, and new justices to the Supreme Court, to entrench liberal governance.

None of that will happen, because Republicans are in a strong position to hold the Senate. Once Georgia has a special election in January, Republicans should keep 51 or 52 seats. If Biden gets the traditional “honeymoon” for a new president, Senate Majority Leader Mitch McConnell will be his chaperone.

Biden is on track to becoming the first president to take office with a Senate controlled by the opposition since George H.W. Bush in 1989. Back then, Senate Democrats, led by George Mitchell, kept Bush from achieving most Republican legislative priorities. McConnell is at least as wily as Mitchell was.

Now every inch of liberal legislative gains will be an uphill struggle. There won’t be a public option. Court packing is dead. If the 6-3 Republican advantage on the Supreme Court changes, it will have to be the old-fashioned way. Even the Trump tax cuts are likely to survive nearly unchanged. The last time Congress voted affirmatively to raise income-tax rates was in 1993. They rose again in 2013 only because the law made it happen automatically, when George W. Bush’s tax cuts hit their expiration date. Trump’s tax cuts are mostly set to stay in place through the next presidential term.

Biden will have to pick a cabinet, too, that is less progressive than he would have chosen if the Senate elections had gone better for Democrats.

A lot of progressives have come to look on the Obama record as inadequate. But Obama would not have been able to achieve nearly as much of his agenda without a large Democratic majority in the Senate in his first two years. Neither Obamacare nor the Dodd-Frank financial-regulation law would have passed with a Republican Senate.

Voters have foreclosed one option for a Biden presidency: the liberal steamroller. Two remain open. Biden could try to govern the way Obama and Trump did after they lost control of the House: by relying on executive action. Both presidents felt able to secure only a fraction of their agenda that way, though, and the courts limited them further. Biden will surely push forward with some unilateral action, too, and especially will rescind Trump orders. He’ll restore Obama-era rules on immigration and Planned Parenthood funding, for example. But he must know that executive action is not a formula for a successful presidency.

The alternative would be to make bipartisan deals. When Biden has talked about his past involvement in such deals, a lot of progressives rolled their eyes at the old man’s nostalgia. But he may know something they don’t: McConnell isn’t actually opposed to deal-making, provided it’s of the right type.

Sometimes it was because the legislation resulted from direct negotiation with McConnell and other Republican leaders. During Obama’s first term, such talks resulted in an increased debt ceiling, a few years of restraint on discretionary spending and the partial extension of Bush’s tax cuts. Biden was the main negotiator on that last item.

Progressives thought he didn’t drive a hard enough bargain then, and they’ll say it again if President Biden tries to make deals with McConnell. A presidency that operates that way will yield legislative results far to the right of what Democrats have been hoping for. And it will be a bumpy road, because Senate Republicans won’t give McConnell a free hand.

Biden and McConnell might be able to agree on Covid-19 relief — so long as it includes liability protections for businesses that follow safety guidelines. Or on some increased subsidies to patch up Obamacare in return for keeping the deregulated plans Trump allowed. These accomplishments won’t thrill liberals, and will anger some of them. But they may be the most promising path that voters have left open to him.