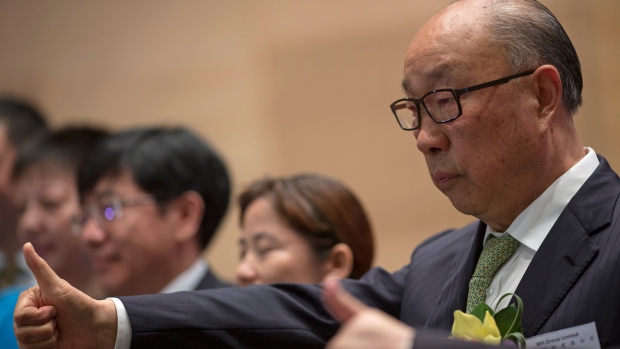 The highest paid executive of a Hong Kong-listed company last year wasn’t a high-flying financier or real-estate tycoon. It was Wan Long, a former factory manager who helped turn a humble state-owned meat processor into the world’s biggest pork producer -- and in doing so built his own fortune.

Compensation for Wan, chairman and chief executive officer of WH Group Ltd., was US$291 million in salary and stock payments last year, according to the company’s annual report.

Wan’s big 2017 compensation package wasn’t a fluke. Between 2013 and 2017, he received at least US$759 million in salary and stock, according to company filings. His direct and indirect holdings in the company, held via multiple entities, jumped dramatically from about 9 per cent in the year of its 2014 initial public offering to about 19 per cent last year, according to its filings. WH currently has a market value of about US$15 billion.

WH’s director of investor relations, Luis Chein, said Wan deserved his 2017 reward for building its business and leading the US$4.7 billion acquisition of Smithfield in 2013. The chairman has boosted profits and cut debt, and the board expects he will help the firm grow even more, Chein said. The company didn’t make Wan available for an interview.

Large CEO pay packages have the potential to increase the risk of a popular outcry about inequality, and thus attract the attention of the Chinese government concerned about threats to social stability, said Oliver Rui, a professor of finance and accounting at China Europe International Business School in Shanghai.

As the number of Chinese billionaires grows, the issue of inequality poses a challenge to the ruling Communist Party. In his blueprint for economic policy, President Xi Jinping has made a priority of heading off social tensions by trying to narrow income disparities.

Wan’s 2017 compensation was more than the combined pay of the next 26 best-paid CEOs of Hong Kong-listed companies, according to Bloomberg data.

Wan, who was born in 1940, started working at a government-owned meat factory in China’s central Henan province in 1968 and eventually became the plant’s general manager. By 2007, the government had sold what was then called Shuanghui Group, which went on to acquire Smithfield and list in Hong Kong as WH Group in 2014.

The rapid increase in the size of Wan’s shareholding was exceptional, said Aris Stouraitis, director of the Centre for Corporate Governance and Financial Policy at Hong Kong Baptist University. “That’s quite unusual for any market, not just for Hong Kong."

Over the years, stock awards helped boost his holdings as did other transactions. For instance, between July 11 and July 13, 2016, a company 90 per cent owned by Wan bought 729 million WH shares for an average HK$3.35 per share, about 45 per cent below market price, according to exchange filings. The company declined to comment on the transactions.

Shareholders will meet June 4 for WH’s annual meeting, where one item on the agenda will be a vote on Wan’s proposed reelection to the board. In March, WH announced the appointment of the CEO’s son, Vice President Wan Hongjian, to the board, effective at the conclusion of the annual meeting.

The elder Wan’s big stock award comes at an awkward time, given the challenges WH now faces. China in March this year announced plans to impose 25 per cent tariffs on pork imported from the U.S.

In April, the pork producer reported a 9.3 per cent drop in operating profit for the first quarter of 2018, fueling a one-day 9.5 per cent drop in its stock, which is now the 10th worst performer on the benchmark Hang Seng Index this year.

Wan’s 2017 award was granted under a 2013 incentive plan, which set aside about 350 million shares for future pay to executives, employees or advisers. That plan gave Wan and Deputy Chairman Jiao Shuge the right to select the terms and recipients, according to its filings. Jiao couldn’t be reached for comment.

On April 28, 2017, WH granted all of the shares to Wan and said in its annual report that management believed the financial target for vesting had been achieved.

In addition to the stock payout, Wan also received a salary of US$2 million last year. Based on the final dividend of 21 Hong Kong cents that the company approved on May 23, 2017, the shares he directly owned could have been entitled to at least US$15 million.

Shareholders, meanwhile, have had mixed results. At the time of the April 2017 pay award, the stock had totally returned 15 per cent from its 2014 listing, outperforming the index’s 9 per cent. But it lagged peers like Tyson Foods Inc. (up 78 per cent) and Hormel Foods Corp. (up 62 per cent).

“Usually the board will reward the CEO because of a good performance in the stock market, but that’s not an impressive performance,” said Rui, the Shanghai professor.

Although WH awarded the shares to Wan last year, he is required to stay with the company until 2019 in order to vest them, according to Chein.

The package was a reward for four years of performance, and a comparison of Wan’s pay last year with executives like Apple’s Cook was “invalid,” said Chein. Annual reports show Wan received separate stock payments each year since 2014.

Cook, head of the world’s largest company by market value, had awarded pay of about $99 million including bonus and stock for 2017, according to the Bloomberg Pay Index. That included his salary, cash bonus and a portion of the US$376 million equity award from 2011 that’s part of a 10-year pay program.

Blankfein, one of the most powerful executives on Wall Street, drew about US$25 million, including equity awards.

Among American CEOs on the Bloomberg Pay Index, Wan was behind only Snap Inc.’s Evan Spiegel for 2017.