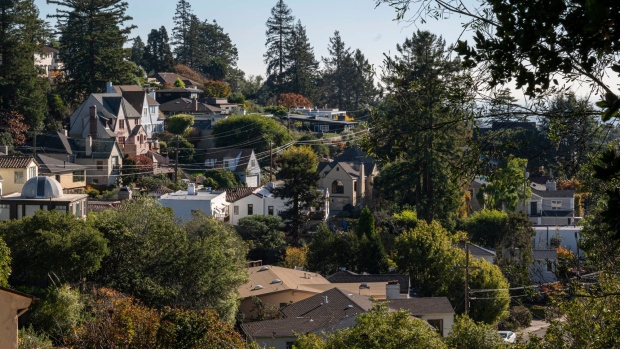 (Bloomberg) -- Amid the sylvan tranquility of the Berkeley hills neighborhood, an image of a snarling predator, fangs bared, stares down at passersby from atop a pole planted in the yard of a sprawling Tudor-style home. “Danger! “Coyotes!” the homemade placard warns.

It’s a sign of a growing climate-driven conflict. Drought and heat waves are not only fueling catastrophic wildfires in California’s wildland-urban interface, they’re also driving coyotes and other wildlife into the streets in search of food and water, according to scientists. That’s triggering clashes among residents over an influx of four-footed climate refugees into the Berkeley hills and adjoining neighborhoods wedged between a vast regional park and San Francisco Bay.

Tracy Richardson says she and her partner put up the sign after a coyote crossed into their yard on an August Sunday morning and growled at them and their three cats. A week later, she says, a coyote snatched one of the felines and ran down the street. “Our cat was sitting like five feet from us and the coyote came up to get the cat,” says Richardson. “We're doing this is to stop the inevitable, which is a human is going to get attacked.”

Attacks on people are rare. But with reports of coyotes roaming the hills and preying on pets multiplying as California’s record-breaking drought drags on, the response from some in this affluent, ecologically self-conscious enclave has become increasingly dark. “I am in favor of shooting the most dangerous coyotes,” one neighbor declared on Nextdoor in August while another wrote, “Would be nice to see coyotes eradicated from the city.”

Richardson has hired a trapper, who placed a cage on their property. No coyote has yet been caught.

Urban coyotes have established themselves as a permanent presence in cities nationwide over the past two decades. Climate change, however, is now pushing wildland animals — coyotes, bears, bobcats, feral pigs, elk — into residential areas where food and water are abundant.

“Most coyotes will try to stay away from folks as much as they possibly can, but as droughts and fires get worse, they will have no choice but to move into human settlements,” says Christopher Schell, an assistant professor at the University of California at Berkeley who studies urban coyotes. “That sets up the perfect storm for human-coyote conflict.”

As climate change alters the habitats and migration patterns of wildlife, those confrontations are likely to rise, scientists say, compelling a reassessment of how humans share a landscape they and their pets have long dominated.

“It's just an incredibly unrealistic expectation to think that we're going to be able to keep wildlife like coyotes out of cities,” says Morgan Farmer, a PhD student researching urban carnivores at the University of Wisconsin-Madison. “Our effort is better spent trying to understand how to coexist rather than to try and remove them.”

Tilden Regional Park is a 2,079-acre preserve of canyons, meadows, eucalyptus forests and oak and bay laurel woodlands that borders Berkeley and other East Bay cities. Nearby residents have long lived with wildlife. Families of deer amble down winding lanes, grazing on carefully cultivated gardens. Gray foxes perch on backyard fences, scouting for squirrels. And on occasion, a mountain lion will leave Tilden for dinner in town, chasing deer through hillside neighborhoods.

Encounters with coyotes tended to be fleeting, a shadowy shape caught in the corner of the eye or in the headlights of a car as the omnivores moved through the hills at dusk and dawn. During periodic droughts, though, daytime sightings become common as water and prey grow scarce in Tilden. Such contact – and the alarm it raises — was cyclical. As the rain inevitably returned after past droughts, so did some coyotes to the park.

Now, scorching heat waves and back-to-back droughts are upending that balance. California is in the second year of an extreme drought, and since October 2020, more than 1,000 acres of trees have died in East Bay regional parks. By fall, most of the parks’ ponds and streams had gone dry for the first time in memory, according to Doug Bell, wildlife program manager for the East Bay Regional Park District. That in turn precipitated a fall in populations of rabbits, squirrels and other coyote chow. As water dries up, wild turkeys have descended into the flatlands, and residents have recently posted sightings of feral pigs roto-tilling lawns and bobcats bounding into backyards.

“It’s been mind-boggling and there probably has been a lot of movement of animals like bobcats and coyotes into the urban environment because we supply a lot of food, water and places for them to seek refuge,” says Bell, noting coyotes’ indiscriminate palate includes cats and other small mammals, fruit and just about anything edible that humans toss in the trash.

Across San Francisco Bay, the black bear population had been extinct in Marin County for 120 years with only rare sightings of individual animals over the decades. Then in May, a homeowner in the town of San Anselmo found a 200-to-300-pound bear clinging to an oak tree in her backyard, a block from downtown.

In neighboring Sonoma County, a 500-pound black bear rambled around a neighborhood near downtown Petaluma last month before seeking refuge in a redwood tree. Martinelli has received so many calls from Sonoma County residents about bears that she is helping lead a two-year genetic study of the population that could shed light on whether climate conditions are prompting migration to cities. She says Tule elk, which were not known to exist in Sonoma, have begun to show up in backyard gardens.

How many coyotes traverse East Bay neighborhoods is unknown, though Schell says planned research projects aim to pinpoint the population and its distribution. He says increased sightings of coyotes in part may be due to more people working from home and strolling their neighborhoods during the Covid-19 pandemic.

One indication of coyote numbers in the area comes from a 2017 study conducted by Farmer when she was a UC Berkeley student. She set up nine camera traps on trails in Tilden and captured images of coyotes over the course of a year. Farmer determined that the park is probably home to six to 10 coyotes; likely many more live in the vicinity and may pass through Tilden.

“There’s a lot of tension between people who are really concerned about the safety of their children or their pets and people who really value the animals and their place in nature,” says Farmer.

Those tensions have intensified in recent months, polarizing an otherwise politically homogenous community where Joe Biden received upwards of 95% of the presidential vote in 2020 and “Hate Has No Home Here” signs dot the yards of $1.8 million houses.

Residents routinely post photos of coyotes trotting down streets during the day on social media along with reports of cats killed by the animals. That’s generated hundreds of comments and petitions to local officials to reduce the animal’s numbers. One neighbor called coyotes “a parasite on human beings” on Nextdoor in August, prompting another to respond, “Coyotes have been living and hunting here since before European colonization. Are you actually advocating for a mass extermination of a species?”

Gina Farr is an environmental educator and advisory board member at Project Coyote, a Marin County-based nonprofit that promotes co-existence with carnivores. She says such reactions express both an ancient fear of predators and a misunderstanding of coyote behavior in residential areas. Wildlife experts say coyotes rarely attack people and incidents mostly happen when a coyote has become habituated to humans who feed the animals or give them easy access to food.

“Coyotes are simply being attracted by a resource that takes very few calories to obtain,” says Farr, noting that keeping cats inside, dogs on leashes and putting food and water out of reach will minimize negative interaction with coyotes.

Kensington resident Marilyn Stollon says she started a spreadsheet of sightings in three East Bay communities after a coyote jumped a fence and chased her cat through a neighbor’s yard. She says she’s so far this year recorded 102 coyote sightings and 21 cats killed.

“I do believe that once urban coyotes have been habituated and are rogue….it may signal that those few need to be removed,” Stollon said in an email, adding that she now keeps her cat inside.

Other factors may drive coyote conflicts. Schell says research shows that coyotes favor green spaces most often found in wealthier communities that may regard the incursion of such outsiders as a threat. “The historical and contemporary legacies of inequality shape how we perceive and treat coyotes and how folks view their ownership of the landscape,” he says. “That will only get worse as fire and drought get worse.”

To Farr, trying to wall off neighborhoods from animals people find problematic is “like digging a hole in the ocean” – there’s always another wave of wildlife to take their place.

“We live in a natural world,” she says, “and we can never sterilize nature around us.”