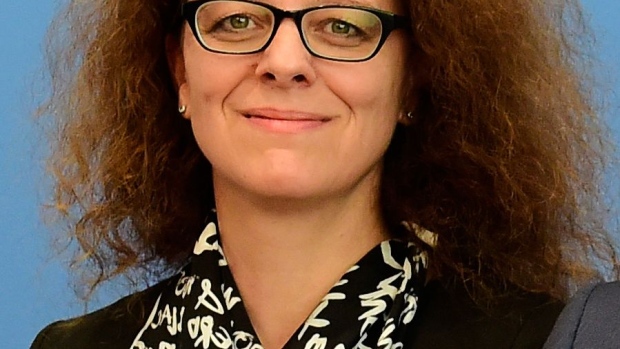 Member of the German Council of Economic Experts Isabel Schnabel poses during the presentation of the council's annual report on the country's economic development in Berlin. Photographer: Tobias Schwarz/AFP/Getty Images , AFP via Getty Images

The European Central Bank’s next German policy maker will bring with her an extensive portfolio of research into how financial systems throughout history have coped with war, bubbles and hyperinflation.

Isabel Schnabel was formally nominated by euro-area finance ministers last week to fill the vacancy opened by Sabine Lautenschlaeger’s unexpected resignation. Perhaps mindful that three German board members in a row have quit early, the government eschewed the traditional recruiting grounds of the Bundesbank -- and, in one case, politics -- and went for an academic.

A glance at the University of Bonn professor’s research shows a taste for historical crises. It suggests that while she’s no anti-stimulus hardliner, she’ll have an acute eye on the risks of the ECB’s strategy of pumping huge volumes of liquidity into the economy in an attempt to revive inflation.

In one paper on 400 years of asset bubbles, she and Princeton University Professor Markus Brunnermeier concluded that they’re typically preceded by an expansionary monetary policy -- no surprise there -- but that “the severity of the economic crisis following the bursting of a bubble is less linked to the type of asset than to the financing of the bubble.”

Schnabel is “definitely not one of the hawks” but also “not as dovish as some people might think,” said Brunnermeier. He described her as “balanced and more European.”

That paper in 2015 acknowledged that the strategy known as leaning against the wind -- or trying to preempt bubbles by tightening policy early -- can work but is also “fraught with difficulties.”

In a 2004 report written with Hyun Song Shin, Schnabel looked back to a 1763 financial crisis that swept northern Europe and saw parallels with more recent episodes. The pattern of interlocking credit relationships and high debt leverage prompted distressed sales of assets and a severe liquidity crisis.

“Whilst the financial institutions have changed fundamentally in the intervening 200 or so years, the underlying problems appear to be universal,” they concluded.

Read more: Why We Love to Call Everything a Bubble

Schnabel is already an adviser to German Chancellor Angela Merkel’s administration and has done the same for the European Systemic Risk Board, which makes proposals to safeguard against systemic risk. Former ECB President Mario Draghi praised her as an excellent economist.

There are hopes that she’ll mend fraught relations between the ECB and Germany by explaining its policies to her compatriots, though she passed on an early opportunity on Wednesday. The latest report by the council of economic experts criticized the decision to restart quantitative easing, pointing to “significant risks and repercussions.” The report said that Schnabel abstained from opinions on monetary policy in light of her nomination.

She was among 14 top French and German economists that made a proposal last year on how to fix the euro region’s weaknesses. Among their suggestions were setting up a euro-area fund to help absorb shocks, creating a euro-area safe asset, and forming stronger institutions for the currency bloc.

More recently, Schnabel teamed up with Shin again for a relatively esoteric angle on the Thirty Years War, an especially destructive 17th century conflict in central Europe that caused around 8 million deaths from fighting, famine and plague.

The pair looked at public deposit banks, finding them to be early precursors of modern central banks that bolstered trust in money and so help quell hyperinflation. They also said the lessons learned from that period still resonate today in debates on cryptocurrencies -- a potential threat to central banks -- and the nature of money.

That research goes to the heart of Schnabel’s core theme -- that financial stability is crucial and the question for central banks is not whether they should take account of it, but how. In an article for Sweden’s Riksbank in 2016, she considered the implications for the euro zone and its negative interest rates, a topic she’ll find herself debating repeatedly over the next eight years -- assuming she completes her term.

“The ECB may find itself in a straightjacket in the future because raising rates would threaten the stability of the financial system, making an exit from low interest rates more and more difficult,” she said. “This calls for decisive actions to prevent a further build-up of risks now.”