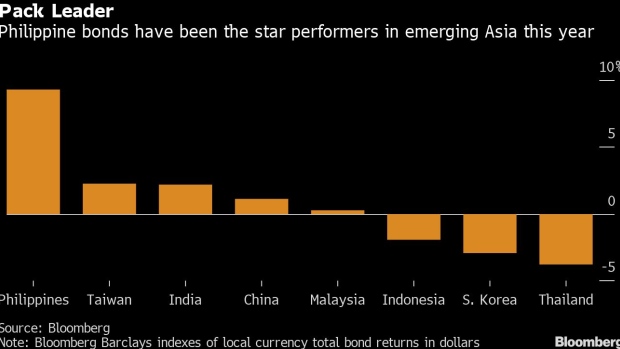 Traders work beneath an electronic ticker on the trading floor of the Philippine Stock Exchange in Bonifacio Global City (BGC) Metro Manila, the Philippines, on Friday, March 13, 2020. A month long lockdown in the Philippine capital to contain the spread of coronavirus is set to curb economic growth and make an interest-rate cut next week more likely. Photographer: Veejay Villafranca/Bloomberg , Bloomberg

After turning out to be the stars of emerging Asia this year, a strengthening peso, proactive central bank and demand from local lenders is putting them on course for more gains.

The nation’s sovereign debt has returned 10% since the start of January, while joint second-place holders Taiwan and India have only risen 2%. This year’s rally in peso bonds follows a 27% gain in 2019, versus 7% for emerging-Asian bonds as a whole.

A key driver for further gains is likely to be demand from local banks deploying funds freed up by a lower reserve requirement ratio. Bangko Sentral ng Pilipinas trimmed the measure by 2 percentage points in March to cushion the economy from the impact of the coronavirus. The central bank has already signaled another similar-sized reduction by year-end, and has plenty of room to ease further as the ratio of 12% remains the highest in Southeast Asia.

Policy makers also have room to keep yields suppressed by further direct bond purchases. The central bank snapped up 300 billion pesos ($6 billion) of government debt in March under a repurchase agreement, but still has scope to buy another 240 billion pesos until it reaches the maximum allowed under current law. There’s even a proposal to increase the threshold for purchases to 30% of the government’s average revenue from 20%, Governor Benjamin Diokno said this week.

Analysts say the central bank has also been actively buying government bonds in the secondary market, as Diokno flagged in comments in April.

The shrinking economy may help deliver another boost to bonds as it puts pressure on the central bank to keep easing policy. Policy makers are predicted to trim their benchmark by another 25 basis points this year, building on the 125 basis points of cuts they have already made since January, according to a Bloomberg survey.

The nation’s sovereign debt should also benefit from the prospect of a strengthening local currency.

The peso is likely to rise by year-end due to a weaker dollar and the fact it’s relatively sheltered from yuan weakness arising from U.S.-China tensions, said Terence Wu, a currency strategist at Oversea-Chinese Banking Corp. in Singapore.

“Even though the Philippine economy is seeing headwinds in line with the Covid-19 situation, the fundamentals in the form of FX reserves are still improving and this should provide increasing support for the peso,” he said. OCBC, which has been the second-highest ranked peso forecaster for the past two quarters in Bloomberg rankings, predicts the currency will end the year at 49.8 per dollar.