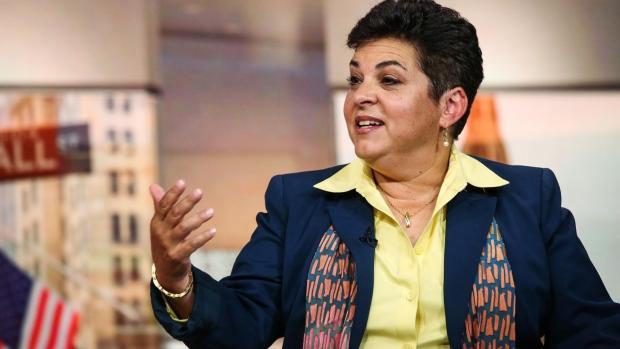 Lisa Shalett, head of investment and portfolio strategies at Morgan Stanley Investment Management Inc., speaks during a Bloomberg Television interview in New York, U.S., on Tuesday, Aug. 7, 2018. Shalett said that emerging markets are very close to ending their negative run, and are likely to post a strong finish to the year. , Bloomberg

Such an outlook, she added, is not reflected in current earnings estimates, which remain too high despite multiple downward revisions.

“A lot of corporate guidance is delusional,” Shalett, the division’s chief investment officer, told Bloomberg TV Tuesday, blaming not only analysts but chief executive officers as well. “I just think it’s going to be a rude awakening for a lot of folks.”

Shalett said the brunt of the downside surprises will likely be born by e-commerce, social media and other companies whose fortunes are closely tied to swings in the economy, including those selling discretionary consumer goods, rather than the whole of corporate America.

“It’s more the specific slice of it, but it’s the slice that, unfortunately, at the minute, dominates the market cap and the weight of how we are comprising consensus estimates,” she added.

Bloomberg Intelligence expects full-year 2022 earnings per share for the companies in the S&P 500 to come in at $223.6 and rise to $229.7 in 2023, based on the note published on Dec. 2 by Wendy Soong. Estimates for next year continue to drift lower though remain relatively high.

Shalett said earnings forecasts in general remain too optimistic given the unprecedented confluence of factors weighing on the outlook, including Federal Reserve rate hikes and the risk of a recession.

“If the Fed succeeds, if the Fed pauses, which is what all the enthusiasm is about, that pricing power at best is going to halve and at worst is going to go away completely at the same time that your volume is slowing,” she said. “It’s that kind of negative operating leverage that I just don’t think is in the numbers.”

And despite the strength of the labor market, a pinched consumer might lead to further economic slowing as they burn through pandemic-era savings.

“Consumers are starting to run out of dough,” she said. “As we get into 2023, we think everything rests with the consumer.”

--With assistance from Lisa Abramowicz and Jonathan Ferro.