Major U.S. technology and internet stocks have returned to favor on Wall Street, renewing concerns about valuations as investors rotate back into growth-oriented names amid a decline in Treasury bond yields.

With the S&P 500 information technology index up about 16 per cent this year, Morgan Stanley Wealth Management sees valuations as “extreme,” noting that the sector’s price-to-sales ratio of 7.4 has risen to levels last seen during the dot-com bubble in 2000.

Apple Inc. and Microsoft Corp. closed modestly lower on Monday while Amazon.com ended flat. All three have recently hit record levels. Both Alphabet Inc. and Facebook Inc. closed higher, with Alphabet ending at a record. All five companies are scheduled to report quarterly results before the end of the month. 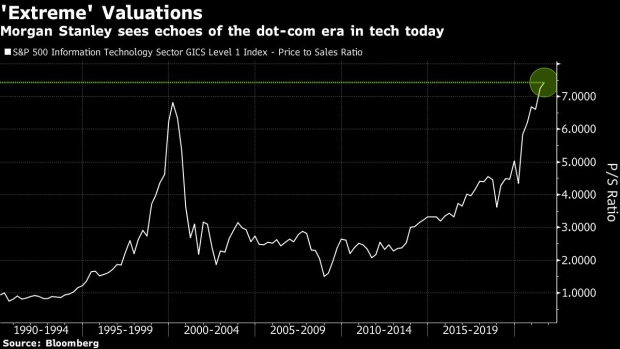 That advance reflects a view that the rapid growth spurred by the nation’s reopening won’t be sustained in the long run, which, in turn, has helped push the yield on the U.S. 10-year Treasury note to below 1.4 per cent from 1.7 per cent in March. If yields were to move back up again, however, that could put even more pressure on valuations.

“The gain in these big-cap tech stocks is as simple as the 10-year going from 1.7 per cent to 1.3 per cent. Being at 1.7 per cent really creamed tech multiples,” said Ted Mortonson, technology desk sector strategist at Baird. “I have to say, however, that compasses are really spinning out there. I talk to people who are very confused about why we are at 1.3 per cent on the 10-year.”

In a phone interview last week, Mortonson pointed to rising commodity costs and other signs of inflation as potential risk factors. However, he maintained a positive view of mega-cap tech’s long-term growth potential.