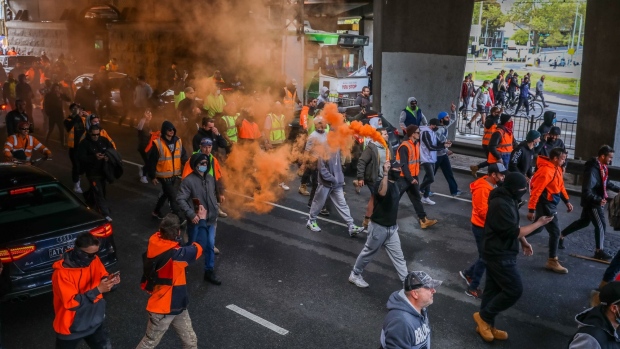 (Bloomberg) -- Australia’s Victoria state said it would come down hard against further protests after thousands of people demonstrated in Melbourne against Covid-19 restrictions and a shutdown of the construction industry.

Flanked by police officials while addressing the media, Premier Daniel Andrews condemned the “ugly” behavior Tuesday, which culminated in the business district being closed and a raft of arrests. Minister for Police Lisa Neville warned people to avoid entering the city and said she’d ordered police to use any means necessary to stamp out unrest.

“Victoria police will deploy whatever tactics they need to ensure that you are held accountable,” Neville told reporters. “They have my full support to ensure that these violent thugs are unable to cause further harm to our city.”

Protesters have taken to the streets since the weekend demonstrating against stay-at-home orders, while construction workers rallied on Monday against compulsory vaccinations for the sector. Tuesday’s unrest was triggered after the state government ordered building sites to be closed for two weeks to slow the rate of infections.

The state recorded 628 infections on Wednesday and three deaths overnight.

The main construction union has blamed right wing extremist groups for the violent scenes on the streets of Melbourne and says its members are not to blame.