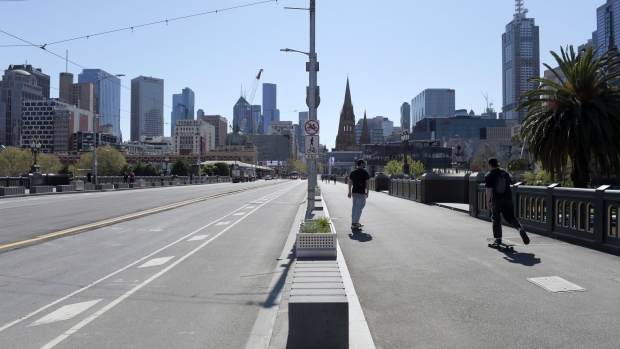 (Bloomberg) -- Melbourne will end its sixth lockdown since the pandemic began once 70% of Australia’s Victoria state is fully vaccinated, authorities said Sunday as they outlined plans to unwind virus measures next month.

Limits on “reasons to leave your home and the curfew will no longer be in place” once that target is met around Oct. 26, Victoria’s Premier Daniel Andrews told reporters. “Lockdown will be off.”

Pubs, clubs and entertainment venues in the nation’s second-most populous city will be allowed to operate outdoors with up to 50 people who have received two shots. Schools are expected to start reopening on Oct. 5.

About 44% of Victoria state is already fully vaccinated, according to federal government data.

Melbourne and the rest of Victoria will be under the same set of eased rules after 80% of people in the state aged 16 and older have obtained double doses, which is expected to happen in early November. As many as 30 visitors will be allowed in homes by Christmas.

In neighboring New South Wales state, restrictions will ease in some parts of Sydney from Monday. The state reported 1,083 new infections on Sunday, its lowest daily count this month.