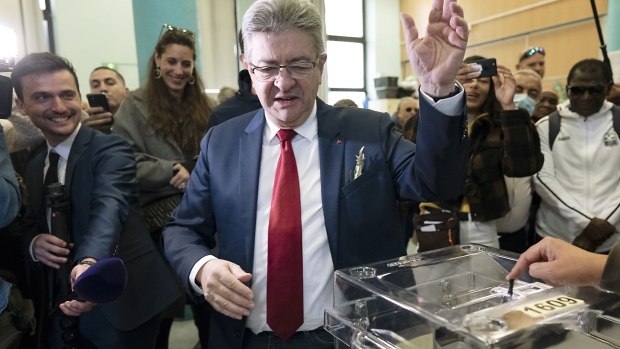 Jean-Luc Melenchon casts his vote during the first round of the French presidential election in Marseille, France, on April 10. , Bloomberg

(Bloomberg) -- France’s far-left leader Jean-Luc Melenchon, who finished in third place in the first round of the presidential election, said he wants to become prime minister whether Emmanuel Macron or Marine Le Pen wins Sunday’s run-off.

“I’m asking the French to elect me prime minister,” Melenchon told BFM-TV on Tuesday evening. He urged his backers not to vote for the far-right leader Le Pen for president, but said it wasn’t his role to tell people whether they should vote for Macron, cast a blank vote, or abstain.

“I won’t be telling you whom you should vote for -- look into your heads to find what’s good,” he said.

Melenchon finished with 22% of the vote on April 10 -- only 420,000 votes short of reaching the runoff -- as left-leaning people rallied behind him. Since then, both Macron and Le Pen have been seeking to woo his 7.7 million backers with social or green policy measures.

Melenchon is looking ahead to the June legislative elections. If his France Unbowed party gathers a majority in the National Assembly, he would be ready to lead the government of either Macron or Le Pen, he said.

The 70-year-old suggested he would be open to entering an alliance with other left-wing parties to obtain a majority in parliament. He declined to say whether he would run as a candidate for the legislature in June.

The French constitution states that the president names the prime minister. But when the president doesn’t hold a majority in the National Assembly, he has typically chosen a prime minister from the new majority, like Francois Mitterrand did in 1986 and Jacques Chirac in 1997.