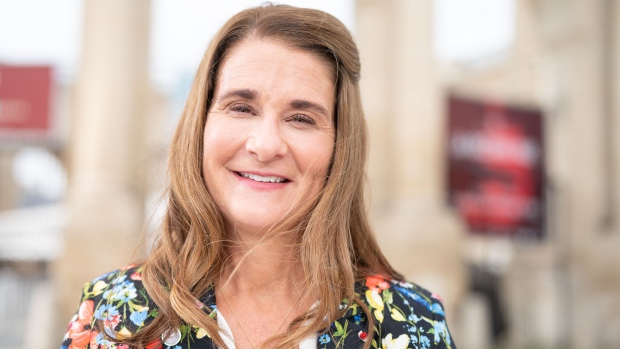 Melinda Gates, co-chair of the Bill and Melinda Gates Foundation, poses for a photograph following a Bloomberg Television interview at the Group of Seven (G-7) finance ministers and central bank governors meeting in Chantilly, France, on Thursday, July 18, 2019. Global finance chiefs found common ground in their fear of Facebook Inc.’s Libra initiative as they met to discuss more contentious issues from digital taxation to the economic outlook. , Bloomberg

(Bloomberg) -- Cascade Investment, the investment company created by Bill Gates, transferred stock in Deere & Co. to Melinda French Gates, bringing the total amount she’s received since they announced their divorce this month to more than $3 billion.

The investment vehicle transferred about 2.25 million shares worth about $851 million, according to a regulatory filing. That followed similar disclosures tied to Mexican companies Coca-Cola Femsa and Grupo Televisa and about $1.8 billion of stock in Canadian National Railway Co. and AutoNation Inc.

The separation involves the transfer of wealth on a scale that’s rarely seen. Cascade, which is managed by Michael Larson, has a complex array of holdings, including value stocks, private equity, energy, hospitality and venture capital. It controls $52 billion in equity holdings. The couple are also among the largest landowners in America.

Agricultural-machinery maker Deere is one of its biggest positions, with Cascade holding more than 10% of the stock valued at $11.9 billion. The largest public holding is a $12 billion stake in waste-collection company Republic Services Inc, Bloomberg data show.

Their divorce comes after the 2019 separation announcement of Jeff Bezos and MacKenzie Scott, who received a quarter of the Bezos’s 16% stake in Amazon.com Inc. in the split.

Scott, now the fourth-richest woman in the world, became one of the most prolific donors of 2020, contributing to gender equality causes alongside French Gates.

The Gates fortune is valued at about $145 billion, according to the Bloomberg Billionaires Index, and could prove more complex to carve up than the Bezos assets, which were largely concentrated in Amazon stock.