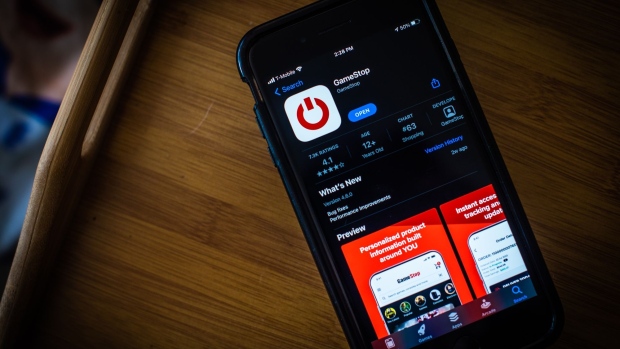 The GameStop Corp. application for download in the Apple Inc. app store on a smartphone arranged in Hastings-On-Hudson, New York, U.S., on Friday, Jan. 29, 2021. GameStop Corp. advanced on Friday and was on track to recoup much of Thursday’s $11 billion blow after Robinhood Markets Inc. and other brokerages eased trading restrictions on the video-game retailer. Photographer: Tiffany Hagler-Geard/Bloomberg , Bloomberg

Melvin Capital lost about 53 per cent in January on GameStop Corp. and more than a dozen other bets after the firm found itself on the receiving end of a short squeeze started by retail investors motivated on Reddit, according to a person familiar with the firm’s performance.

Melvin now has the lowest amount of leverage since the firm was founded in late 2014, the person said. The hedge fund said last week that it had “repositioned the portfolio,” including covering its GameStop short.

Founded by Gabe Plotkin, a former portfolio manager for Steven Cohen, Melvin now manages more than US$8 billion, including US$2.75 billion in funds that Citadel LLC and Cohen’s Point72 Asset Management put into the hedge fund last week. It also includes capital from current clients who are adding to their investments, the person said.

Citadel’s hedge funds, along with founder Ken Griffin and firm partners, put US$2 billion into Melvin. The funds lost less than 1 per cent in January on their Melvin position, according to a person familiar with Griffin’s firm.

Point72, which invested US$750 million and already had about US$1 billion in the firm, was down between 10 per cent and 15 per cent through late January. It was unclear how much of that loss was from its investment in Melvin.

Melvin’s losses were earlier reported by the Dow Jones.