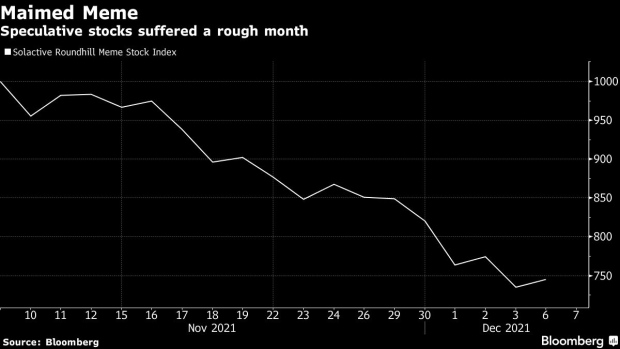 (Bloomberg) -- An ETF seizing on the rise of the retail trader is about to launch -- just as speculative stock bets on Wall Street plummet.

Roundhill Investments is pushing on with plans to list the Roundhill MEME exchange-traded fund (ticker MEME) on Wednesday, according to the firm’s Chief Executive Officer Will Hershey.

The product is set to track the Solactive Roundhill Meme Stock Index -- which screens companies based on social-media activity and short interest to create a portfolio of 25 retail-friendly equities.

So-called meme stocks exploded into the collective consciousness in early 2021, when scores of day traders orchestrated epic short squeezes in the likes of GameStop Inc. and AMC Entertainment Holdings Inc.

The speculative fervor has cooled since then, and a hawkish tilt from Federal Reserve Chief Jerome Powell earlier this month dragged down expensive and risky stocks. The Solactive Roundhill Meme Stock Index slumped 14% in the five days ending Friday. GameStop and AMC have both plunged more than 30% over the past two weeks.

Still, new day-trader favorites emerge regularly whenever online message boards light up. Hershey sees that impulse persisting even as the Fed starts to scale back its massive stimulus program.

“I think it’s function of too much liquidity in the system, but it’s hard to say it’s going away,” Hershey said in a phone interview. “It’s not about one stock, it’s not about AMC or GameStop. It’s about this whole concept of retail investors -- but it can be more than that -- getting behind a concept or a single stock for no reason other than they just are.”

Roundhill’s ETF is the latest attempt in the $7 trillion U.S. ETF arena to tap into this year’s meme-stock mania. The VanEck Vectors Social Sentiment ETF (BUZZ) quickly gathered assets of about $500 million after launching in March. However it struggled to maintain momentum and is down roughly 0.4% since then, with assets falling to around $160 million.

BUZZ rebalances monthly -- potentially a long time in message-board investing cycles. MEME will rebalance every two weeks and that should help set it apart, Hershey said. And unlike BUZZ, the ETF isn’t limited to large-cap stocks.

“It really is a phenomenon that’s not being quantified with any products that are out there and until now, there was no way for people to put on that trade,” Hershey said.