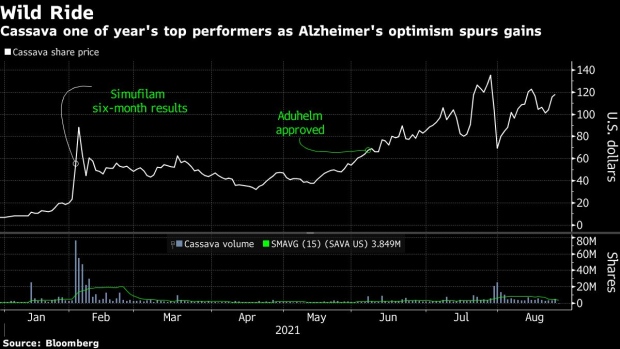 A pedestrian walks near the U.S. Securities and Exchange Commission headquarters in Washington, D.C., U.S., on Thursday, Jan. 2, 2020. The federal appeals court in Manhattan today said the government may pursue insider-trading charges under a newer securities-fraud law not subject to a key requirement of the statute prosecutors traditionally use. Photographer: Andrew Harrer/Bloomberg , Bloomberg

A citizen petition from a former Securities and Exchange Commission enforcement lawyer questioned the quality and integrity of the results from the over 20-year-old company with no products on the market.

“As a science company, we champion facts that can be evaluated and verified,” Remi Barbier, Cassava’s chief executive officer and founder said in a statement countering the claims in the request.

The stock had rallied more than 1,600% so far this year gaining momentum on day trader enthusiasm for the space following the approval of Biogen Inc.’s Aduhelm, the first new drug approved for the brain disease in over decade as well as Cassava’s own trial results.

Lawyer Jordan Thomas of Labaton Sucharow alleged that some of the company’s results appeared to show signs of data manipulation, which Cassava denies.

Bearish bets against the company rose from a February low and now stand at $576 million or roughly 13% of the company’s available shares, according to S3 Partners data.

Austin, Texas-based Cassava didn’t respond to requests for comment made during the early morning hours.