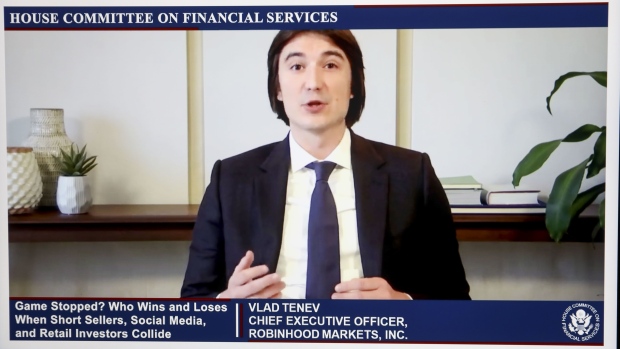 (Bloomberg) -- Robinhood Markets Inc. faced a more dire situation during the height of last year’s meme-stock frenzy than executives at the online brokerage let on publicly, according to a report from top Democrats on a key congressional committee.

A more-than-yearlong investigation by staff on the House Financial Services Committee concluded Friday that the frenzied trading in GameStop Corp. and AMC Entertainment Holdings Inc. posed a significant threat to the online brokerage. Robinhood avoided defaulting on its regulatory collateral obligations in late January 2021 only because it received a waiver from its clearinghouse, according to the findings.

Robinhood drew the ire of lawmakers on Capitol Hill last year after the surge in demand for meme stocks prompted the firm and some of its competitors to temporarily prevent clients from buying shares of some companies. The episode led to congressional hearings, threats of new regulations and added scrutiny for some of the biggest names in stock trading.

“The company was only saved from defaulting on its daily collateral deposit requirement by a discretionary and unexplained waiver,” according to the report. “Robinhood’s risk-management processes did not work well to predict and avert the risk of default that materialized.”

As stock-trade orders surged in late January 2021, Robinhood’s collateral obligations at its clearinghouse increased 10-fold. Ultimately, the demands forced the company to seek a $3.4 billion cash infusion from its venture-capital investors.

The 138-page document released on Friday provides the most detailed look yet at how alarmed Robinhood executives grew over the situation in late January 2021. According to the findings, those actions didn’t match the firm’s public assertions.

For example, Robinhood Chief Executive Officer Vlad Tenev said during a February 2021 hearing before the committee that the company was “always comfortable with our liquidity.”

Howard then quickly notified Tenev about the concern and sparked what Friday’s report called “extensive crisis management.” Robinhood had been facing these operational concerns “all week” internally, and was worried that the issue could become public, according to the report.

Lucas Moskowitz, deputy general counsel and head of government affairs for Robinhood, said in a statement that the report was “nothing new” and showed how the events of January 2021 were unique.

“The report corroborates that the decisions and requests Robinhood made and waivers granted were generally the same decisions, requests and waivers made and granted by others in the industry,” Moskowitz said. Robinhood remains confident that it “took the appropriate and responsible steps necessary to protect and support our customers” and has made improvements since, he said.

Beyond Robinhood, the committee’s investigation was billed as an attempt to get to the bottom of one of the wildest periods for the US stock market in recent memory. A confluence of events -- retail investors banding together on Reddit message boards to drive stocks to astronomical levels, hedge fund short-sellers getting hammered with losses and Robinhood and other brokerages temporarily halting the rally -- gripped Wall Street and Washington for months early last year.

Meanwhile, Republicans on the committee pushed back on the probe’s findings, which were released by Democrats including Chairwoman Maxine Waters.

Patrick McHenry, the top GOP member of the panel, said that the investigation used the public outrage to push for new regulations, and that it was a missed opportunity to “level the playing field” for retail investors.