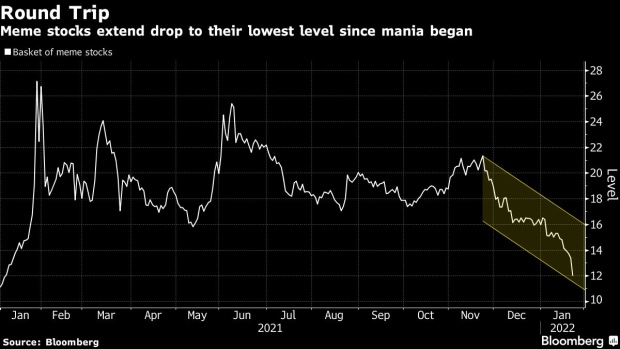 AMC Entertainment Holdings Inc. and GameStop Corp. tumbled Monday, bringing losses over the past two months to around 60%, as investors dump the formerly high-flying meme stocks and companies that went public by merging with blank-check firms. A basket of 37 meme stocks tracked by Bloomberg sank 10% at 12:30 p.m. in New York, extending a now seven-day slide that has wiped out more than 20% of its value.

The companies that surged at the start of last year as their tickers populated forums like Reddit’s WallStreetBets and the trader chatroom Stocktwits have spiraled as investors bail on money-losing bets and riskier investments like cryptocurrencies.

Companies that went public by merging with special-purpose acquisition companies, known as SPACs, have been in a free-fall over the past 11 months. The De-SPAC Index, which tracks 25 companies, is down 68% from a February high, shedding more than a third of its value since the beginning of January.