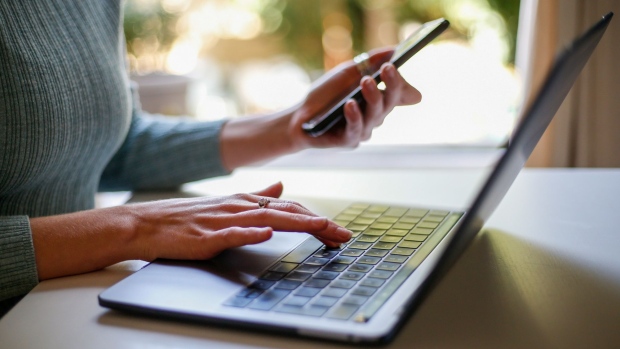 A woman uses a laptop as she holds a mobile phone in this arranged photograph in London, U.K., on Thursday, Sept. 10, 2020. U.K. consumer spending jumped the most since 2016 last month, led by a surge in Internet purchases as bars and restaurants continued to suffer. Photographer: Hollie Adams/Bloomberg , Bloomberg

The gender wage gap in tech is alive and well, albeit improving — slightly.

In 2020, male job candidates were offered higher salaries than their female counterparts for the same role at the same company 59 per cent of the time, according to data collected by Hired, a platform that matches job seekers with open technology and sales roles. On average, those salaries were 3 per cent higher for men than women. Though certain markets have bigger gaps than others. In London, men have 10 per cent higher pay, compared to 5 per cent in the San Francisco Bay Area and 7 per cent in New York.

The gap shrunk slightly from 2019, when male candidates got higher offers 65 per cent of the time, and received an average pay of 4 per cent more than women. It improved for people of color too, as Black candidates saw wages that were 4 per cent lower than the baseline in 2020 compared to a gap of 5 per cent in 2019.

“We were pleasantly surprised and excited to see that the gap is narrowing in terms of in terms of the wage gap, but we have a long way to go,” said Josh Brenner, chief executive officer at Hired. “We continue to see that underrepresented groups across the board are paid less than their White male counterparts for the same role.”

The tech industry is notorious for its bro culture, defined by high-flying companies that are mostly male and have long had a history of widespread bias. While women are entering the field in greater numbers and starting to move up the ranks, progress is slow, and is especially reflected in pay. It’s also taken on a new prominence since last year’s Black Lives Matter protests, as companies have placed a renewed focus on narrowing racial inequity.

The discrepancies can often be a self-fulfilling prophecy. Women expected to earn 6 per cent less than men in 2019 compared to 3 per cent in 2020, improving alongside the actual wage gap. The two are so strongly correlated that a narrowing gap in expectations can end the resulting disparity entirely, Brenner said.

“People can get stuck in a cycle of having lower pay over time because they truly don’t know,” Brenner said. “They don’t know what is the average or what is the fair compensation for the role, for the experience that they have.”

One of the best ways for businesses to move toward pay equality is by being transparent with compensation data, Brenner said. Companies like Starbucks Corp. and McDonald’s Corp. are increasingly releasing more statistics about the breakdown of their workforces. More may follow suit under President Joe Biden’s Paycheck Fairness Act, which requires employers to provide pay information data regarding the sex, race and national origin of employees to the U.S. Equal Employment Opportunity Commission to help enforce federal laws prohibiting pay discrimination.

Hired surveyed more than 2,000 tech employees over the course of last year. It also drew data from its network of over 10,000 participating companies.