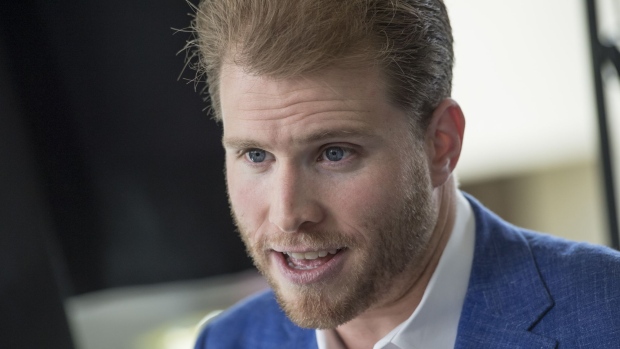 Joe Lonsdale, chairman and co-founder of Addepar Inc., speaks during a Bloomberg Television interview at the Leaders In Global Healthcare and Technology (LIGHT) conference at Stanford University in Stanford, California, U.S., on Thursday, May 11, 2017. The LIGHT conference gathers leaders from a broad cross-section of executives and top policy makers in the health-care field to discuss the latest developments, challenges and opportunities shaping the healthcare industry. , Bloomberg

(Bloomberg) -- Joe Lonsdale, a founder of Palantir Technologies Inc. and a prolific venture capitalist, stoked a debate on Twitter about parental leave, saying any prominent man who takes six months off with his newborn is “a loser.”

The comment was made in response to a tweet about Pete Buttigieg, the U.S. Transportation secretary who took time off to care for his child, and criticism from the podcast personality Joe Rogan.

Among the many responses to Lonsdale’s post Wednesday, the founders of another venture capital firm, Initialized, offered a rebuke. Alexis Ohanian and Garry Tan defended their parental policy, which is four months. Tan said he took the leave and hoped his employees would follow suit.

A father of three, Lonsdale is a regular critic of “woke” politics. He is a longtime associate of Peter Thiel, the powerful conservative billionaire. Lonsdale’s venture investments include Flexport Inc., Joby Aviation Inc. and Oculus, which was acquired by Facebook Inc. He also runs an advocacy group with his wife called the Cicero Institute, which focuses on criminal justice, health care and other causes.

Last year, Lonsdale decamped from Silicon Valley to Austin, Texas, because he disagreed with San Francisco city leaders and was attracted to the more liberal gun laws and absence of personal income taxes in the state. (Austin is, of course, not the most conservative place in Texas.)

Despite his reputation, the response to Lonsdale’s message Wednesday was unusually strong and mostly negative. Later on Twitter, he said using the word loser was “uncalled for,” but he doubled down on the importance of maintaining traditional gender roles.